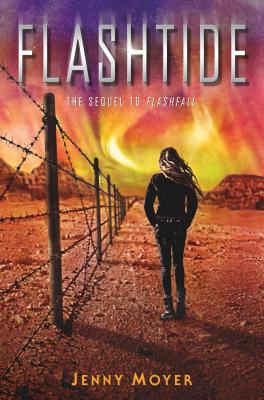 Orion has survived the tunnels of Outpost Five, filled with mutant creatures and dangers around every bend. She has traversed the cordons, exposed to the radiation of the flash curtain and hunted by forces that want her stopped, dead or alive. Now, with Dram by her side, she has made it to the safety of the mountain provinces, where free Conjurors live and practice their craft of manipulating matter.

But Orion's story is far from over.

With the effects of the flashfall spreading and the might of the protected city of Alara looming, Orion must travel into the hands of her enemies once again. Heart-pounding action and adventure await in Flashtide, Jenny Moyer's thrilling follow up to Flashfall.

"Fans of the unique post-apocalyptic story will be riveted by the blistering pacing and unexpected twists." —Kirkus Reviews

“A grim, fast-paced adventure novel that dares you to blink!” —Aprilynne Pike, #1 New York Times–bestselling author of the Wings series

Jenny Moyer is the author of Flashfall. She grew up in Arizona, where she learned to fly before she could drive. Jenny studied writing at Seattle Pacific University and co-owns Luminary Creative with her filmmaker husband, Jacob. She lives in Des Moines, Iowa, with her three boys and three-pound dog, Emmy.
Loading...
or
Not Currently Available for Direct Purchase