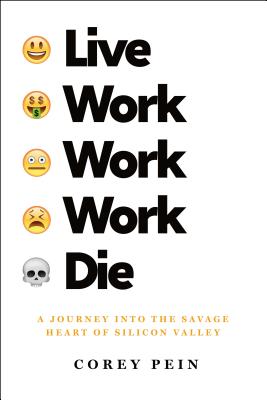 A Journey into the Savage Heart of Silicon Valley

A scathing, sardonic exploration of Silicon Valley tech culture, laying bare the greed, hubris, and retrograde politics of an industry that aspires to radically transform society for its own benefit

At the height of the startup boom, journalist Corey Pein set out for Silicon Valley with little more than a smartphone and his wits. His goal: to learn how such an overhyped industry could possibly sustain itself as long as it has. But to truly understand the delirious reality of the tech entrepreneurs, he knew he would have to inhabit that perspective—he would have to become an entrepreneur himself. Thus Pein begins his journey—skulking through gimmicky tech conferences, pitching his over-the-top business ideas to investors, and rooming with a succession of naive upstart programmers whose entire lives are managed by their employers—who work endlessly and obediently, never thinking to question their place in the system.

In showing us this frantic world, Pein challenges the positive, feel-good self-image that the tech tycoons have crafted—as nerdy and benevolent creators of wealth and opportunity—revealing their self-justifying views and their insidious visions for the future. Vivid and incisive, Live Work Work Work Die is a troubling portrait of a self-obsessed industry bent on imposing its disturbing visions on the rest of us.


Praise For Live Work Work Work Die: A Journey into the Savage Heart of Silicon Valley…

“Impressive . . . Reminiscent of Hunter S. Thompson’s Hell’s Angels in both style and conceit, Live Work Work Work Die is a combination of New Journalism and muckraking told with an anthropological eye. . . . Alternately amusing and horrifying.”
—Salon


“Irreverent and snarky . . . A Gulliver’s Travels of the current tech boom, Pein’s book is essential reading for anyone who thinks they might want to wade into tech’s entrepreneurial waters. His sharp outsider observations of the San Francisco scene and ability to nose out the intellectual influences behind some of its biggest players make Live Work Work Work Die one of the most complete snapshots of the Silicon Valley today.
—National Post (Canada)


“Pein is a fluent writer who knows not to over-egg the jokes and sometimes let the material speak for itself. And that material, both researched and experienced, is magnificent. Without the humour, the book would be utterly depressing, for it paints a picture that would make a saint blush, although not the CEOs of these companies.”
—Daily Mail (UK)


“In the spirit of George Orwell’s Down and Out in Paris and London, Corey Pein takes us on a gonzo misadventure through the underbelly of Silicon Valley, exposing the dystopian comedy behind the techno optimism with wry observation and gleeful contempt. A helluva ride.”
—Joe Hagan, author of Sticky Fingers: The Life and Times of Jann Wenner and Rolling Stone Magazine


“All praise to Corey Pein for jumping headfirst into the cesspool of Silicon Valley and returning without having lost his mind or sold his soul. His reports from the front lines of the startup frenzy are hilarious and terrifying. While all eyes are glued on President Trump, a shortsighted and reactionary techno-oligarchy aims to amass a fortune at the cost of the common good. There’s no app that can save us. But this book can at least wake us up to the dystopian future under construction.”
—Astra Taylor, author of The People’s Platform: Taking Back Power and Culture in the Digital Age


“The Silicon Valley that Pein uncovers is not unlike dystopian visions we are accustomed to seeing in science fiction.”
—The New Republic


“Pein’s absurdly funny journey is a Through-the-Looking-Glass tale for the dying days of tech utopianism. Built on the creative vanity of this new class of talentless speculator and designed entirely without human need in mind, this world of nonsense quickly turns dystopian when seen from the perspective of a worker and renter trying to make his way through it.”
—Angela Nagle, author of Kill All Normies: Online Culture Wars From 4Chan And Tumblr To Trump And The Alt-Right


“You sleep in a pantry because you can’t afford a real apartment. You exploit yourself, destroy your health, and ruin the lives of millions when you finally succeed. You think of crime as a great business model. You embrace some of the worst politics ever devised. And you call it progress. Silicon Valley, the capitalist miracle. That is the American nightmare as Corey Pein brilliantly describes it, and it is not a work of the imagination. This is really happening, and soon it will be happening to you.”
—Thomas Frank, author of Listen, Liberal and What’s the Matter with Kansas?


“Both entertaining and damning, Pein’s book unmasks the shell game being run by venture capitalists in an industry that is not nearly as benign as it claims to be.”
—Publishers Weekly


“Deeply unsettling . . . A clearheaded reckoning with the consequences of the tech industry’s disruptions and the ideology that undergirds it.”
—Kirkus Reviews


“Like Jon Ronson, Pein combines serious journalism with humor and his own antics for an entertaining and caustic mix. If Silicon Valley and Black Mirror had a book baby, it would be Live Work Work Work Die.”
—Booklist

Corey Pein is a regular contributor to The Baffler, where he writes a column and hosts the podcast "News from Nowhere." A longtime investigative reporter and former staff writer for the Willamette Week, he has also written for Slate, Salon, Foreign Policy, The American Prospect, and the Columbia Journalism Review, among other publications. He lives in Portland, Oregon.

Corey is the author of Live Work Work Work Die: A Journey into the Savage Heart of Silicon Valley.