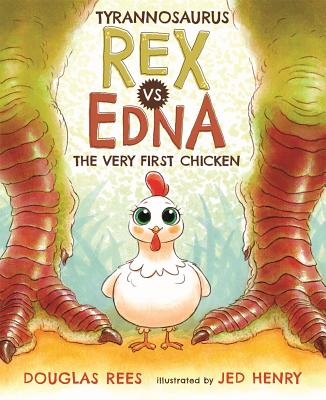 Tyrannosaurus Rex wants breakfast. He stomps and he roars and he gnashes his teeth—and he scares all the other dinosaurs right out of the forest.

Only Edna, the very first chicken, is unafraid. She won't let that bully T. rex push her around! But will Edna's mighty beak and terrible flapping wings be a match for T. rex's mighty claws and terrible jaws?

This hilarious tale of bravery will have readers clucking in triumph!

Douglas Rees is an author and librarian from the San Francisco Bay Area. He is best known for his Uncle Pirate books and Vampire High young adult series.

Jed Henry has illustrated many wonderful books for children, including his own Cheer Up, Mouse and I Speak Dinosaur. He lives in Provo, Utah with his wife and daughter.

Praise For Tyrannosaurus Rex vs. Edna the Very First Chicken…

"This title is a delight . . . Funny, colorful, and different." —School Library Journal

"Roaring to the forest at large that he's after his breakfast, Tyrannosaurus sends Ankylosaurus, Parasaurolophus, and the rest of the heavily armored dinos fleeing in panic. But not Edna. . . . Readers will join the chorus of grateful herbivores in proclaiming that Edna is 'awesome.'" —Kirkus Reviews

"Rendered in radiant hues and punctuated with crowd-pleasing proclamations. . . . Rees and Henry prove that 'fierce' can have feathers, too." —Publishers Weekly