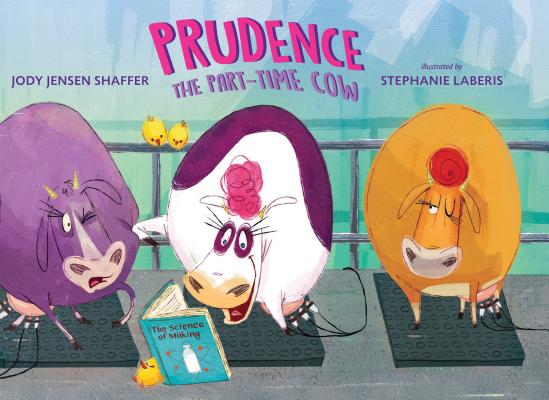 Prudence looks like a full-time cow—she wanders through pastures, she swats flies, and she lines up for supper. But Prudence is a part-time cow—she is also a scientist, an architect, and an inventor, studying and building and dreaming and creating. To the other cows in the herd, Prudence is a bit too part-time. She's just too different to be part of the herd. At first Prudence tries to fit in, suppressing all her scientific smarts and imaginative inventing. But in a moment of inspiration—Cow Power!—Prudence realizes how to show the others that she can be a part-time cow and a full-time member of the herd. Funny and sweet, this is a story for anyone who's ever felt a bit different.

Praise For Prudence the Part-Time Cow…

"Shaffer creates a sympathetic outsider in Prudence, whose dedication to self-betterment—and the sciences—should resonate with any reader who feels pigeonholed or underappreciated." —Publishers Weekly on Prudence the Part-Time Cow

Jody Jensen Shaffer has written many books for children, on everything from ninja warriors to celebrities to grizzlies, including The Way the Cookie Crumbled and Victoria Justice: Television's It Girl. Jody once received a bicycle for winning a haiku contest. She lives in Missouri with her husband and children.

Stephanie Laberis is an illustrator and character designer who specializes in creating art for animation, children's publications, and toys. Her books include Merry and Mythical Stickers and the Animal Inn series. She lives in San Francisco.
Loading...
or support indie stores by buying on