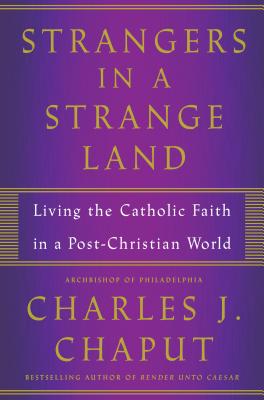 Strangers in a Strange Land

Living the Catholic Faith in a Post-Christian World

A vivid critique of American life today and a guide to how Christians—and particularly Catholics--can live their faith vigorously, and even with hope, in a post-Christian public square.

From Charles J. Chaput, author of Living the Catholic Faith and Render unto Caesar comes Strangers in a Strange Land, a fresh, urgent, and ultimately hopeful treatise on the state of Catholicism and Christianity in the United States. America today is different in kind, not just in degree, from the past. And this new reality is unlikely to be reversed. The reasons include, but aren't limited to, economic changes that widen the gulf between rich and poor; problems in the content and execution of the education system; the decline of traditional religious belief among young people; the shift from organized religion among adults to unbelief or individualized spiritualities; changes in legal theory and erosion in respect for civil and natural law; significant demographic shifts; profound new patterns in sexual behavior and identity; the growth of federal power and its disregard for religious rights; the growing isolation and elitism of the leadership classes; and the decline of a sustaining sense of family and community.


Praise For Strangers in a Strange Land: Living the Catholic Faith in a Post-Christian World…

"Erudite and eloquent...his book should be read by serious-minded people of whatever religious, partisan or intellectual inclination."—The Wall Street Journal

"Strangers in a Strange Land is a thought-provoking depiction of a complex contemporary scene. As he fills in his canvas, the author cites a wide variety of sources: magisterial documents and Church Fathers (especially Augustine), historical figures, contemporary ethicists and social scientists, and even poets. Yet throughout the book Chaput is much more than a cultural commentator; he is a pastor instructing souls. Although his message is challenging, the tone is always civil, conversational rather than controversial, and never preachy. In a non-academic way, with remarkable clarity and gentle wit, the author offers remedial lessons in Catholic morality and social doctrine for generations."—Catholic World Report

“Christians often disagree about how that hope shouldmanifest itself in our public and cultural engagements. Chaput’s book is aserious and thoughtful contribution to that crucial question….The argument of Strangers islevelheaded and well-researched. The book itself is an inspiring act of publicwitness by one of the American Church’s most prominent bishops. Crisplywritten, it is an accessible read in spite of the author’s learnedness.” —PublicDiscourse

“The intellectual scope of Archbishop Chaput’s book isimpressive…“Strangers in a Strange Land” is a tour de force of scholarlythought on the development of Western society….For those concerned about thepresent and future of American society, “Strangers in a Strange Land” is amust-read that will leave you thinking and praying long after you’ve finishedit.”—Denver Catholic
p_includ?Q2? n

"Readers of faith will find much to contemplate in Chaput’s well-argued examples of the state of Christian influence on American culture."—Publishers Weekly

"essential reading for all small-o orthodox Christians, not only Catholics."—The American Conservative

"Many people have recently worked this same ground, but none more astutely and with such breadth of cultural reference. Chaput brings together some of the very best secular as well as religious thinking about our situation...the Archbishop of Philadelphia has plenty to say. Read him."
—TheCatholicThing.com

"Chaput is an erudite writer, and his work includes a wide array of quotations and allusions. His observations on Western culture are keen, and while secular-minded readers will find plenty to argue with, his writing will appeal to a wide Christian audience. An optimistic account of the church's future in the midst of a secular age."—Kirkus Reviews

"Well documented, with citations to a wide variety of sources in such areas as literature, philosophy, theology and politics, this book will appeal to traditionally oriented Catholics."—Library Journal

“Archbishop Chaput is…an engaged thinker and writer, with agift for bringing his learning lightly to the page so that important andcomplicated topics are made clear and accessible.” —FirstThings.com

“Archbishop Charles J. Chaput assesses with histypical clarity the bewildering situation for committed American Catholics…whatmakes Archbishop Chaput’s book unique is his approach as a pastor and teacherof the Faith.” —CatholicPhilly.com

"a very careful, thoughtful, sound analysis of the landscape of our lives; it is much more than what is so frequently offered: highly charged, angry speculation."—Sooner Catholic

“This is an important book about the most important questions – who are we as Christians, and how do we live and love, work and create? How do we raise our families, educate our children and carry out our Christian mission? How do we serve God in this 'strange land' that now, too often, sees the Church, her teachings and her institutions as an enemy? A must-read for Catholics and anyone concerned for America's future.”—Most Reverend José H. Gomez, Archbishop of Los Angeles

“At a time when many American Christians feel like 'strangers in a strange land,' one of the country's most courageous and respected prelates has given us much needed words of wisdom for the challenges ahead. This forward-looking guidebook should be on every Catholic's bookshelf.”—Mary Ann Glendon, Former U.S. Ambassador to the Holy See and Learned Hand Professor of Law at Harvard University

“Clear-eyed, courageous, unsentimental and driven by real hope, this prophetic book is not only for Catholics, but for all believers who wonder how we're going to get through the unprecedented challenges ahead.” —Rod Dreher, author of The Benedict Option and How Dante Can Save Your Life

“Archbishop Charles Chaput is the intellectual successor to Francis Cardinal George within the college of American bishops, and his latest book -- smart, incisive, crisply-written, witty, and inspiring -- shows why. Chaput trenchantly explores what the Church must be and how it must behave within the context of a post-Christian culture. Drawing on figures as diverse as Tocqueville, Newman, Benedict XVI, MacIntyre, and the ancient author of the Letter to Diognetus, he argues, not that the Church should withdraw from the world, but that it should function as light and leaven within the world. I would warmly recommend this text to anyone interested in the play between faith and culture.” —Most Reverend Robert Barron, author of Catholicism: A Journey to the Heart of the Faith

“Pivotal and insightful, unsettling but hopeful, this book captures many of the challenges of following Jesus Christ at a time when his way, truth and life are obscured or deemed unattractive by modern forces. Like a physician who understands not only the pandemic but its cure, Chaput offers concrete ways Christians can heal and be healed by loving Christ and being a witness of his love in a troubled world.” —Carl A. Anderson, Supreme Knight, Knights of Columbus and author of A Civilization of Love

“In a shrewd look at postmodern confusions and obsessions, Chaput presents his readers with the challenge of living in harmony with the whole symphony of the Gospel's consequences. Echoing Paul's call to put on the whole armor of God and Augustine's description of the ordering of loves befitting the City of God, this book is a beckoning to paths of righteousness by a shepherd who clearly loves those in his care.” —Ken Myers, producer and host, Mars Hill Audio Journal

“. . . a bracing reflection on what the future holds for Christians living in a modern world increasingly cold to their beliefs. Studded with observations from some of the most provocative thinkers of the past century, Strangers in a Strange Land explores the complex trajectory of American political and social thought. With 'going along to get along' no longer an option, Chaput challenges us to ask ourselves: Do we really believe in God or not? Are we really on fire with a love for Jesus Christ or not? For the author, living the truth with hope and joy is our one sure path forward.” —Greg Erlandson, editor in chief of Catholic News Service

"Every believer in a position of authority over other citizens needs to read Strangers in a Strange Land, but so too does every Christian who is wondering what is happening and, crucially, how they ought to live in this new world . . . This is the real deal, the book you need for 2017 and far beyond. There are many reasons why Archbishop Chaput is beloved by Catholics of all political positions and stations and why his intellectual leadership has been tasked again by both Popes Benedict and Francis, and this book underscores why. Read it. Buy it for your friends. Urge it on your small groups. It is the book for this moment in America. “—Hugh Hewitt, author, professor of law and radio host

"For those looking for guidance on how to quit whining and to live in the next America, Archbishop Chaput nails it." —Alan E. Sears, President and General Counsel for the Alliance Defending Freedom

“Archbishop Chaput’s compelling book makes clear that the struggle for Church freedom is not just about our legal rights, but is ‘a much greater effort to defend the truth of the human being, and to speak the truth about what our present sexual and social revolution portends.’ He offers both a clear diagnosis of our country’s challenges and a powerful inspiration for Catholics to follow the path to the City of God.” —William Mumma, President of the Becket Fund for Religious Liberty

“What do we do now? We're blessed to have Archbishop Chaput's answer in this timely and essential book.” —Gerard V. Bradley, Professor of Law at the University of Notre Dame

Archbishop Emeritus Charles J. Chaput, OFM Cap., was named archbishop of Philadelphia in 2011 by Pope Benedict XVI. As a member of the Prairie Band Potawatomi Nation, he was the second Native American to be ordained a bishop in the United States and is the first Native American archbishop. Chaput is the author of Strangers in a Strange Land, Living the Catholic Faith, and Render unto Caesar, as well as numerous articles and public talks. Retiring as archbishop emeritus in 2020, he continues his extensive writing and public speaking.
Loading...
or
Not Currently Available for Direct Purchase