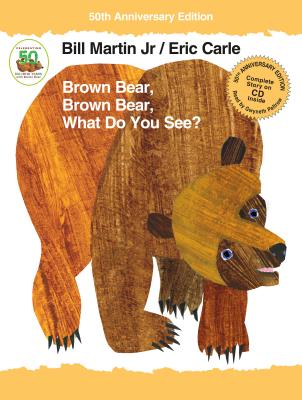 A special 50th Anniversary Edition of the classic Brown Bear, Brown Bear, What Do You See?, complete with audio CD read by Gwyneth Paltrow.

Fifty years ago, Bill Martin Jr and Eric Carle collaborated on their first book together, Brown Bear, Brown Bear, What Do You See? Since then, Brown Bear has become a perpetual favorite for generations of teachers, parents, and children.

To celebrate Brown Bear's 50th birthday, this special anniversary edition is a larger size, has an updated cover, and includes an audio CD. Brown Bear fans will be able to read along with the story as it's read on the CD and hear the author and illustrator talk about this beloved book.


Praise For Brown Bear, Brown Bear, What Do You See? 50th Anniversary Edition with audio CD (Brown Bear and Friends)…