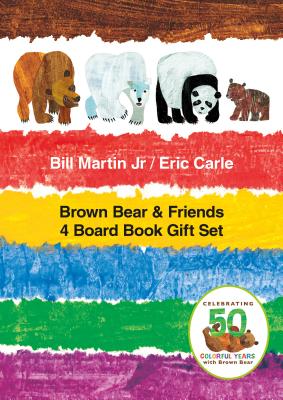 Bill Martin Jr and Eric Carle's classic Bear books have been a hit with children, parents, and teachers for many generations and have sold more than eleven million copies. Now collect all four Bear Book board books together for the first time in this gift set.

Young readers will love discovering each story and its individual theme: the colors of the classic Brown Bear, the sounds of Polar Bear, the endangered species of Panda Bear, and the North American animals of Baby Bear.


This title has Common Core connections.

Eric Carle is one of America's leading children's book illustrators. Born in the United States, he spent some time in Germany where he studied at the Academy of Applied Art in Stuttgart. His work has won many awards and has been published in more than a dozen countries around the world. He is author and illustrator of The Very Hungry Caterpillar and illustrator of Bill Martin, Jr.'s Brown Bear, Brown Bear, What Do You See?
or support indie stores by buying on
(This book is on backorder)