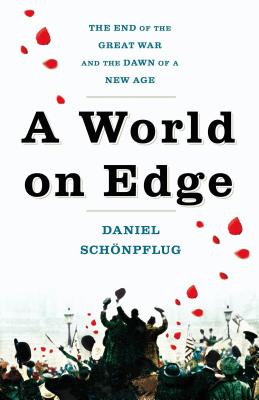 A World on Edge (Hardcover)

The story of the aftermath of World War I, a transformative time when a new world seemed possible—told from the vantage of people, famous and ordinary, who lived through the turmoil

November 1918. The Great War has left Europe in ruins, but with the end of hostilities, a radical new start seems not only possible, but essential, even unavoidable. Unorthodox ideas light up the age: new politics, new societies, new art and culture, new thinking. The struggle to determine the future has begun.

Sculptor Käthe Kollwitz, whose son died in the war, is translating sorrow and loss into art. Captain Harry Truman is running a men’s haberdashery in Kansas City, hardly expecting he will soon go bankrupt—and then become president of the United States. Moina Michael is about to invent the “remembrance poppy,” a symbol of sacrifice that will stand for generations to come. Meanwhile Virginia Woolf is questioning whether that sacrifice was worth it, and George Grosz is so revolted by the violence on the streets of Berlin that he decides everything is meaningless. For rulers and revolutionaries, a world of power and privilege is dying—while for others, a dream of overthrowing democracy is being born.

With novelistic virtuosity, Daniel Schönpflug describes this watershed time as it was experienced on the ground—open-ended, unfathomable, its outcome unclear. Combining a multitude of acutely observed details, Schönpflug shows us a world suspended between enthusiasm and disappointment, in which the window of opportunity was suddenly open, only to quickly close shut again.

Daniel Schönpflug is an internationally recognized historian at the Free University, Berlin. He has also lectured at Harvard University, the Sorbonne, and the University of London. As the author of numerous docudramas and a consultant on radio and television programs, he has also successfully brought history to a wider public.

Praise For A World on Edge: The End of the Great War and the Dawn of a New Age…

“Daniel Schönpflug has written the historian’s version of John Dos Passos’ epic novel U.S.A.—now with global protagonists whose kaleidoscopic biographies let us experience the jagged transition from the First World War into an unsettled era of artistic innovation, political promise, disillusion, and violence.”
—Charles S. Maier, author of Once Within Borders: Territories of Power, Wealth, and Belonging

“For a brief moment a century ago the end of the Great War offered peace and the prospect of a bright new social order to a dark, ravaged Europe. In his moving and inspired book, historian Daniel Schönpflug recreates how these days were experienced by the people who lived them—their struggles, dreams, and desires—and traces the elusive fate of their noble visions. An evocative and deeply affecting requiem for what might have been.”
—Douglas Smith, author of Rasputin: Faith, Power, and the Twilight of the Romanovs

“1918 was a watershed. Daniel Schönpflug tells the stories of the men and women who were transformed by this historical moment—and who would go on to transform the future. A brilliant panorama of a world in turmoil.”
—Daniel Jütte, author of The Strait Gate: Thresholds and Power in Western History

“With a marvelous eye for detail and a highly accomplished style, Schönpflug transports us directly to the astonishing year 1918. A masterpiece.”
—Philipp Blom, author of Fracture: Life and Culture in the West, 1918-1938