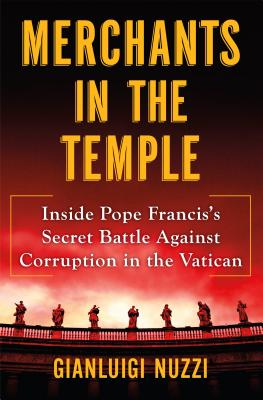 Merchants in the Temple

Inside Pope Francis's Secret Battle Against Corruption in the Vatican

From a bestselling author with unprecedented access to Pope Francis, an investigative look at the recent financial scandals at the highest levels of the Vatican

A veritable war is waging in the Church: on one side, there is Pope Francis’s strong message for one church of the poor and all; on the other, there is the old Curia with its endless enemies, and the old and new lobbies struggling to preserve their not-so-Christian privileges.

The old guard do not back down, they are ready to use all means necessary to stay in control and continue the immoral way they conduct their business. They resist reforms sought by Pope Francis and seek to delegitimize their opponents, to isolate those who want to eliminate corruption. It’s a war that will determine the future of the church. And if he loses the battle against secular interests and blackmail, Pope Francis could resign, much like his predecessor.

Based on confidential information—including top secret documents from inside the Vatican, and actual transcripts of Pope Francis’s admonishments to the papal court about the lack of financial oversight and responsibility—Merchants in the Temple illustrates all the undercover work conducted by the Pope since his election and shows the reader who his real enemies are. It reveals the instruments Francis is using to reform the Vatican and rid it, once and for all, of the overwhelming corruption traditionally encrusted in the Roman Catholic Church.

Merchants in the Temple is a startling book that will shock every reader. It’s a story worthy of a Dan Brown novel, with its electrifying details of the trickery and scheming against the papacy—except that it is real.


Praise For Merchants in the Temple: Inside Pope Francis's Secret Battle Against Corruption in the Vatican…

Praise for MERCHANTS IN THE TEMPLE
“Nuzzi has significant sources within the Roman Curia, allowing him access to "exclusive, never-before-published documentation" that reveals a truly shocking, shameful story of waste and corruption within the vast network of Vatican finances. . . . The network of subterfuge is bewildering, and the barriers to transparency perhaps more than Frances can overcome, as Nuzzi delineates with valiant candor. While more historical context would be useful, this is a provocative work of dogged investigative research.”—Kirkus

"With...Gianluigi Nuzzi’s Merchants in the Temple, I’m absolutely impressed. The account is packed with excerpts from confidential documents that are no doubt authentic. Even the Vatican tacitly admits as much. The author’s analysis of the numbers and account of the byzantine internal politics are thoroughly convincing. In fact, the figures he reveals both confirm my own reporting about the Vatican but fill in many facts I was unable to obtain. Most of all, Merchants in the Temple shows that a lot of the money isn’t being spent where the Vatican claimed....In Merchants in the Temple, Nuzzi draws an admiring but startling portrait of Pope Francis....As Nuzzi makes clear, this Pope is a fearless reformer with a shrewd mind for business. The leaks may be illegal, but they’re not the real scandal. The scandal is the mismanagement that’s been hidden for far too long. These revelations should make the need for urgent reform obvious to the world outside the walls of the Vatican. And that’s the message Francis has been trying to send all along."—Fortune

Gianluigi Nuzzi is an Italian journalist, nonfiction writer and TV anchorman. He is the author of two bestselling titles,Vaticano SpA and Sua Santità, which sold more than one million copies in Italy, Germany, France, Spain, the United States, Brazil and the Netherlands. He lives in Milan.
Loading...
or
Not Currently Available for Direct Purchase