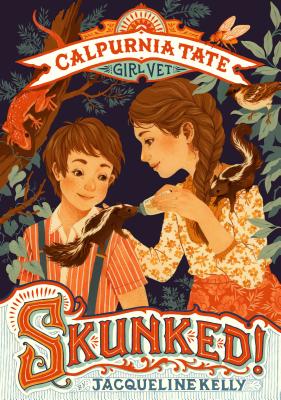 When soft-hearted Travis discovers an abandoned baby skunk, he can't help but bring him home and take care of him. Stinky, as Travis names him, settles in pretty well. But when Travis discovers Stinky's litter-mate, Winky, who is in need of some help, things get complicated around the Tate house. One skunk is a piece of cake; two is just asking for trouble. Will Travis and Callie be able to keep the critters away from Mother's careful eyes—and nose?

"Expect a fresh crop of Calpurnia readers to simply enjoy this on its own considerable merits." —Booklist on Skunked!: Calpurnia Tate, Girl Vet

“Narrator Calpurnia's voice is fresh and convincing, and Granddaddy is that favorite relative most readers would love to claim as their own. Historical fiction fans are in for a treat.” —BCCB on The Evolution of Calpurnia Tate

Teagan White is a freelance illustrator who specializes in intricate drawings of flora and fauna. Originally from Chicago, Teagan now lives and works in Minnesota, where she received a BFA in illustration from the Minneapolis College of Art & Design in 2012. She is the cover artist for the Calpurnia Tate, Girl Vet series by Jacqueline Kelly.

Jennifer L. Meyer is an award-winning artist whose work has been featured multiple times in the Best in Contemporary Fantastic Art annual, Spectrum. Born into a fantasy-loving military family, she grew up a big fan of comics, reading, and drawing animals (especially bunnies). Jennifer's art has appeared in comic books, children's books, graphic novels, and other media. She is the illustrator of the Calpurnia Tate, Girl Vet series by Jacqueline Kelly.
Loading...
or support indie stores by buying on