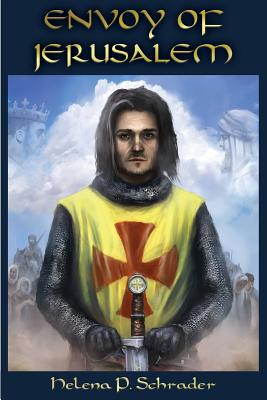 Hollywood made him a blacksmith; Arab chronicles said he was "like a king." He served a leper, but defied Richard the Lionheart. He fought Saladin to a standstill, yet retained his respect. Rather than dally with a princess, he married a dowager queen -- and founded a dynasty. He was a warrior and a diplomat both: Balian d'Ibelin

Balian has survived the devastating defeat on the Horns of Hattin, and walked away a free man after the surrender of Jerusalem, but he is baron of nothing in a kingdom that no longer exists. Haunted by the tens of thousands of Christians now enslaved by Saladin, he is determined to regain what has been lost. The arrival of a vast crusading army under the soon-to-be-legendary Richard the Lionheart offers hope -- but also conflict, as natives and crusaders clash and French and English quarrel. This is Part III of a biographical novel about Balian d'Ibelin. The first two books in the series, Knight of Jerusalem and Defender of Jerusalem, were both BRAG Medallion honorees. Defender of Jerusalem won the 2016 Chaucer Award for Historical Fiction set in the Middle Ages and was also awarded the Silver (second place) for Spiritual/Religious Fiction in the 2016 Feathered Quill Book Awards. It was a finalist for the 2016 M.M. Bennetts Award for Historical Fiction.