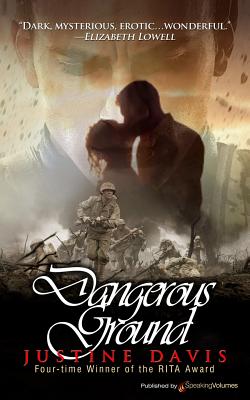 SOMEWHERE BETWEEN THE SHADOWY DEPTHS OF A KILLER'S MIND AND THE HIDDEN PLACES OF THE HUMAN HEART...

Ten years ago Beth Russell's husband, Ian, died during a covert anti-terrorist mission. Now her fifteen-year-old son has vanished. Authorities believe the troubled teenager has run away, but Beth suspects something far more sinister. Only one person may be able to help her. He is Jess Harper, Ian's best friend-and Beth's lover from a long-ago, never-forgotten past.

Yet even Jess is powerless against a shadowy enemy who holds the key to one man's suspicious death...to one boy's disappearance... and to a terrifying conspiracy that stretches to the country's most elite, power-hungry terrorist leaders. To save her son, Beth and Jess must first save themselves by outwitting a madman harboring a secret as dangerous-and inescapable-as death itself.

AND TIME IS RUNNING OUT.

Justine Davis (Dare) was born during a snowstorm in Iowa but raised in sunny California. She began working right out of school. She worked in law enforcement which she found exciting and never, ever boring. She didn't think seriously about writing for several years. She sold her first novel in 1989. She spent the next two years selling nineteen more books. She has won the coveted RWA RITA Award four times, and has been inducted into the RWA Hall of Fame. Her books have appeared on national best-seller lists, including USA Today. Reading, music and photography are few of the pursuits she follows in her free time. Another favorite hobby is cruising around in her restored 1967 Corvette, with the top down, of course. Praise for Justine Davis "Your pulse will pound, your blood will sizzle. The very best suspense." -Romantic Times (Dangerous Ground) "Dark, mysterious, erotic...wonderful." -Elizabeth Lowell (Dangerous Ground)
Loading...
or support indie stores by buying on