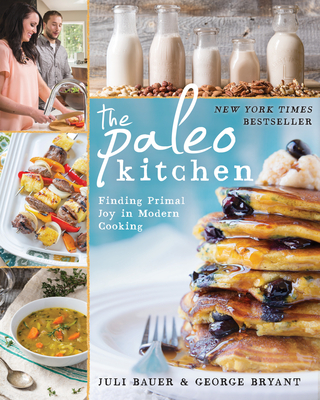 The two top Paleo bloggers have come together to write the ultimate Paleo cookbook with over 100 recipes!

George Bryant and Juli Bauer, two of the most insightful and well-respected Paleo powerhouses, have united to bring a myriad of bold and delectable gluten- & grain-free Paleo recipes straight from their kitchens to yours in their new cookbook, The Paleo Kitchen. Together, George and Juli have masterfully created daring flavor combinations that will bring your Paleo experience to a whole new level. This beautiful cookbook offers full-color photos along with tips, tricks, and anecdotes straight from the clever minds of these culinary mavericks. The Paleo Kitchen boasts more than 100 recipes, from appetizers, entrées, and side dishes to decadent desserts, that are sure to invigorate and please the fearless caveman palate. Recipes include: • Sage and Shallot Delicata Squash Soup • Citrus Mint Sugar Salad • Blackberry Lavender Muffins • Banana Chip French Toast • Four-Layer Bacon and Beef Casserole • Creamy Seafood Risotto • Asian Marinated Asparagus • Spinach and Artichoke Stuffed Portabella Mushrooms • Blueberry Cheesecake • Lime Pound Cake with Coconut Lime Frosting. Experience the Paleo you never thought possible!

The Paleo Kitchen is energetic and full of tantalizing recipes. Juli and George bring the fun back into the kitchen and ensure you will enjoy the process just as much as consuming the meal! This book is packed with wonderful information for beginning a Paleo lifestyle arranged in an entertaining format, and every recipe seems to jump off the page with exciting flavors and colors.
— -DANIELLE WALKER, New York Times bestselling author of Against All Grain

The recipes that Juli and George have created in this book are stunningly inventive, combine bold flavors, and are just plain fun to eat. If taking great pleasure in your food is your goal, The Paleo Kitchen delivers!
— -DIANE SANFILIPPO, New York Times bestselling author of Practical Paleo and The 21-Day Sugar Detox

The Paleo Kitchen is a duet for the ages. Juli Bauer and George Bryant have joined forces to craft a gorgeous new recipe book that’ll delight and inspire you to shop, cook, and eat smarter. With Juli’s signature wit, George’s fabulous photography, and the duo’s tried and true dishes, this cookbook will soon have you dancing in your own Paleo kitchen.
— -MICHELLE TAM, New York Times bestselling author of Nom Nom Paleo: Food For Humans

The dynamic duo of Juli Bauer and George Bryant have partnered to create The Paleo Kitchen, an amazing cookbook full of ingeniously healthy yet delicious recipes that will keep you entertained in the kitchen!
— -ELANA AMSTERDAM, New York Times bestselling author of Paleo Cooking from Elana's Pantry

George Bryant is the creative genius behind the wildly popular Paleo food blog Civilized Caveman Cooking Creations. After spending the first 20-something years of his life in a constant battle with his weight, and then nearly losing both his legs while deployed as a U.S. Marine, George took matters into his own hands and began his Paleo journey. What started as a simple place to post recipes for friends has since become an award-winning food blog. After serving in the Marines for 12 years, George now enjoys working full-time creating delicious Paleo recipes, hoping to change many lives for the better by making simple and tasty real food dishes.

Juli Bauer is a self-described foodie who creates Paleo versions of grain-filled favorites on her extremely successful blog, PaleOMG. She started the blog to help friends make the transition to Paleo a little more easily, only to see it grow from a few readers to more than 100,000 and counting in just eight months. The popularity of PaleOMG can be attributed to Juli’s refreshing honesty about her own trials and tribulations and to her mouthwatering recipes -- and to her heartwarming personality. But what Juli loves most is having the opportunity to be a part of people’s lives through food. And Paleo food is what keeps us living longer and healthier, all together.
Loading...
or
Not Currently Available for Direct Purchase