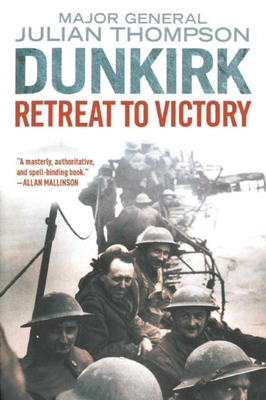 A gripping chronicle, Dunkirk recounts the brave stand of the British Expeditionary Force (BEF) against the German army and the dramatic rescue of 338,000 British troops from the beaches of Dunkirk at the outset of World War II. In May 1940, the small BEF was sent to help the Belgians and French against advancing German forces. Ill-equipped and undertrained, the Allied troops conducted a fighting withdrawal in the face of the formidable Germans. Winston Churchill feared that nearly all of the BEF would be killed or captured, but thankfully most were rescued and a defeat was turned into a victory—one that lives on in the annals of history.

General Julian Thompson draws from previously unpublished and rare materials to re-create the action on the beaches of the small town—from the misunderstandings between the British and French generals to the experiences of the ordinary soldier trying to fend for his life and return to his homeland. Unlike other books on the subject, Thompson’s account gives full weight to the fighting inland as the BEF found itself in mortal danger due to the Belgian army’s collapse on one flank and the French troops’ failure on the other flank. Thompson aims to correct popular myths about the evacuation and set the history straight once and for all about the events that unfolded in May 1940.

Major General Julian Thompson served in the Royal Marines for 34 years and commanded the counter-invasion of the Falkland Islands in 1982. A professor in the Department of War Studies at Kings College, University of London, he is the author of six acclaimed books of military history. He lives in London.
Loading...
or
Not Currently Available for Direct Purchase