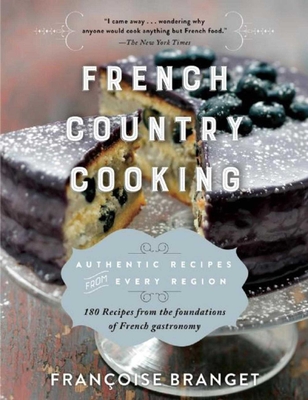 Authentic Recipes from Every Region

French cuisine is revered all around the world, and now French Country Cooking offers the unique opportunity to enter a France that very few tourists ever get to experience. In this richly illustrated cookbook, each gourmand member of the French National Assembly—representing the diverse regions of their native country—shares culinary secrets that will inspire you to try your hand at preparing mouthwatering soups, sides, dinners, and desserts. From a challenging recipe for slow-cooked hare that predates the French Revolution to a simple yet delightful bread, the 180 recipes collected here will satisfy anyone who is curious about the varied dishes of this epicurean country. Some recipes you will find here include:

This unique book, a comprehensive cultural and gastronomic inside look into the private kitchens of homes and farms, is peppered with ancestral recipes passed down through generations. It will enchant the armchair traveler and might even rouse you to visit the lesser-known regions of France—a country rich in many different cuisines.

A Good Cook Book Club selection, French Country Cooking is both warmly personal and wittily political, includes fascinating legends from la France profonde, and is replete with historical information and a great deal of Gallic charm. These recipes are the real thing!

Praise For French Country Cooking: Authentic Recipes from Every Region…