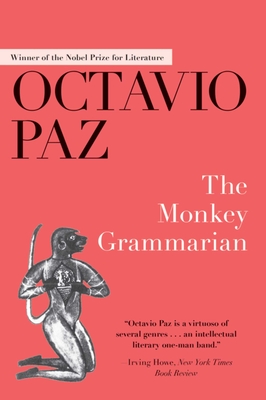 Poet, diplomat, writer, philosopher, hailed as an “intellectual literary one-man band” by the New York Times Book Review, Nobel Prize–winner Octavio Paz was a key figure in the Latin American Literary Renaissance and in world literature. In this entrancing work, part prose-poem and part rumination on the origins of language and the antic, erotic, sacred nature of poetry, Paz takes inspiration from Hanuman, the red-faced monkey chief and ninth grammarian of Hindu mythology. On a journey to the temple city of Galta in India—which Paz finds partially ruined in a leaf-filled countryside surrounded by forbidding hills—Hanuman’s mythical encounters serve as the springboard for the poet’s speculations on all manners of things, from movement and fixity to meaning and identity, the reality behind language, and the nature of nature. Images of the holy city, complete with the marauding monkeys for which it is known, constantly obtrude on his musings.

Perhaps the most poetic of Paz’s prose works, The Monkey Grammarian is visual: every page is rich in images, of palaces and temples, pilgrims and sadhus, and the monkey god himself. Paz’s probing, crystalline prose makes this an unforgettable voyage of the mind.

Praise For The Monkey Grammarian…

“One of a kind, a consistently valuable and fascinating piece of writing.” —Los Angeles Times

“The poet, the monkey-child of nymph and wind . . . dazzles.” —The New York Times

“One of a kind, a consistently valuable and fascinating piece of writing.” —Los Angeles Times

“The poet, the monkey-child of nymph and wind . . . dazzles.” —The New York Times

Octavio Paz was born in 1914 in Mexico City and served as the Mexican ambassador to India from 1962 to 1968. He was the author of many volumes of poetry as well as literary and art criticism and works on politics, culture, and Mexican history. Winner of the Nobel Prize for Literature in 1990, he was also awarded the Jerusalem Prize, the Miguel de Cervantes Prize, the Neustadt International Prize for Literature, and the Peace Prize of the German Book Trade. He died in 1998.

Ilan Stavans is Lewis-Sebring Professor in Latin American and Latino Culture at Amherst College and the publisher of Restless Books. He is the author of Quixote: The Novel and the World and Gabriel Garcí a Má rquez: The Early Years, among other books, and general editor of The Norton Anthology of Latino Literature.
Loading...
or support indie stores by buying on
(This book is on backorder)