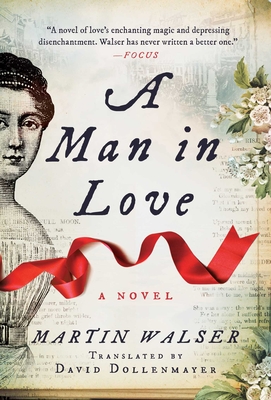 A Man in Love

For readers of Colm Toibin’s The Master and Michael Cunningham’s The Hours, a witty, moving, tender novel of impossible love and the mysterious ways of art.

Johann Wolfgang von Goethe is so famous his servant auctions off snippets of his hair and children and adults recite from his many works by memory. When he was a young poet, his first novel, a story of love and romantic fervor ending in suicide, was an international blockbuster that set off a wave of self-inflicted deaths across Europe. Now seventy-three, sought after and busy with scientific pursuits and responsibilities to the Grand Duke, he has fallen in love with a nineteen-year-old, Ulrike von Levetzov. Infatuated, at the spa in Marienbad, he seeks her out. They exchange glances, witty words. In the social swirl, they find each other. On the promenade, they parade together arm in arm. Time spent away from her is sleepless, and when they kiss, it is in the “Goethian” way, from his books: a matter of souls, not mouths or lips.

And yet, his years fail him. At an afternoon tea party, a younger man tries to seduce her. At a costume ball, he collapses. When he proposes nonetheless, Ulrike and her mother are already preparing to leave. Caught in a storm of emotion and torn between despair and unwillingness to give up hope, he begins an elegy in his coach as he pursues her: “The Marienbad Elegy,” one of his last great works.

Praise For A Man in Love: A Novel…

An International Bestseller
"This beautiful novel depicts the elderly Goethe’s feverish infatuation with a young woman, an obsession that led him to compose the 'Marienbad Elegy.' Goethe, satisfyingly, comes across as complicated rather than strictly sympathetic . . . [and] every bit a sensitive romantic."—The New York Times Book Review, "Editors' Choice"

“A sweet and affecting story . . .  In Mr. Walser’s telling, . . . the couple are cast  as emotional and intellectual equals, her maturity and darting wit matched by his eternally youthful joie de vivre. . . . The Goethe of this novel is a rascal and a fool, but we can’t help loving him.”—Sam Sacks, Wall Street Journal

"Goethe himself is more exposed, and the picture we get of him is more complex than sympathetic. Hs feelings are wildly exaggerated, but his pain is real. . . . At the heart of this beautiful novel lies Goethe’s great late poem about his infatuation, the "Marienbad Elegy" (with the original German helpfully placed beside the English, which shows the deftness of David Dollenmayer’s translation). It’s the work of a famous man who can confidently assume that his private troubles have a scope and scale that make them publicly significant. As they turned out to be.”—The New York Times

"Walser takes us deep into the mind of a towering figure of Enlightenment and Romanticism as two powerful personalities trade witty repartee in sparkling surroundings. . . .. Walser captures a lost world." —Historical Novel Society

“As intimate as ‘The Marienbad Elegy’ itself . . . a moving testament to the devastation of heartbreak.”—Lizzy’s Literary Life

“I’ve never read anything like A Man in Love, truly a strange, alarming, and wonderful novel.  Not the least of Walser’s achievements is the creation of the enchanting young Ulrike von Levetzov, the object of Goethe’s late-life passion, who, with her steady gaze and incisive, ever-ready wit, maddens and delights the great man. She’s every bit his equal, ahead of him from the first sentence.  What a tragicomic tale of obsession! I couldn’t put it down.”—Valerie Martin, author of The Ghost of the Mary Celeste

"A novel of love's enchanting magic and depressing disenchantment. Walser has never written a better one."—Focus

“Walser at his absolute best.”—Spiegel Online

"Immediately beguiling is the grace of Martin Walser's depictions . . . A text full of mirrorings and connections and of insights into poetry itself. . . . Beautiful."—Süddeutsche Zeitung

"With serene mastery—sovereign and psychologically sagacious, mischievous and delightfully playful—he combines the sources with his own inventions and composes letters, conversations, and inner monologues that sound as if they had occurred just this way in 1823."—Hermann Kurzke, Bücher

"[Walser's] most beautiful novel: discreet, tender, and filled with love in its most comprehensive definition. . . . Walser has written his Goethe novel . . . to find out how one of the high points of German poetry could have come into existence: the ‘Marienbad Elegy.’ And he has succeeded."—Frankfurter Rundschau

"Seldom has love been presented as here: in all its disruptive fervor and ludicrousness. . . . This is not Goethe the great genius, but a man who suffers like a dog and is not ashamed of his feelings."—Deutschlandradio Kultur

"Despite its hero, [this is] no Goethe novel but a Walser novel—the tenderest, most unsparing, and most forgiving he has ever written. . . . Here, poetry is not lofty and reality lowly, but everything is great because it is real. Walser's aim is not to create a warmed-over Goethe but a case study of the bitterest kind of love: unrequited. And a case study of life: old age."— Frankfurter Allgemeine Zeitung

“His oeuvre is a monolith towering over Germany's literary landscape. . . . He remains the creator of a singular range of works whose luster will not dull over time."—Weltwoche

Praise for A Gushing Fountain:

“Available in English for the first time, this intense novel by distinguished German writer Walser, an intimate tale of a life disrupted by war and corrupted by a maniacal regime, sheds new light on the impact of WWII on Germany’s youngest and most vulnerable citizens."—Booklist

“None of the major writers of Walser’s generation, from Grass to Johnson, captures as much of the German republic in their prose as [he] does. . . . This author is like a sponge—he soaks up time and gives it back to his readers.” —Stuttgarter Zeitung

"Martin Walser is in a class with Günther Grass and Max Frisch."—New York Times

"One of Walser's most beautiful and perhaps his most important novels."—Jörg Magenau. Martin Walser: Eine Biographie

"An objective masterpiece . . . one of the great books of memory of our literature and our century. . . . Walser's prose is radiantly exuberant."— Süddeutsche Zeitung

"With this fascinating variation on the 'portrait of the artist as a young man,' Walser has given us a superb masterpiece that joins the ranks of great German emancipatory prose."— Märkische Allgemeine

"A Gushing Fountain is a panorama of German provincial life in the Third Reich more precise and believable, more fair and sensitive than anything I have read."— Rheinischer Merkur

"A Gushing Fountain is a masterpiece of the German language, already strangely distant and a little old-fashioned, as masterpieces probably have to be."— Dresdner Neueste Nachrichten

"Walser's dream construction knows no moral, provides no insight from the standpoint of today. From the depths of time he pulls up the old faces and stories, conscience-free, like real dreams . . . they stand next to one another, stern, unmediated, without commentary. No one is indicted, no one acquitted." —Die Zeit

Martin Walser, a contemporary of Heinrich Böll, Günther Grass, and Christa Wolf, remains one of Germany’s most prominent and prolific writers. Born in Wasserburg, on Lake Constance, in 1927, he is the author of numerous novels, stories, and plays, including A Gushing Fountain, published by Arcade. Every one of his novels is a bestseller in Germany, and he has won many awards, including the Georg Büchner Award, the Peace Prize of the German Book Trade, and in 2015 the Nietszche Prize for his life’s work. He lives in Überlingen, near Lake Constanace, Germany.

David Dollenmayer is a literary translator and emeritus professor of German at the Worcester Polytechnic Institute in Worcester, Massachusetts. He is the winner of the 2008 Helen and Kurt Wolff Translator’s Prize and the 2010 Translation Prize of the Austrian Cultural Forum in New York, Before undertaking A Man in Love, his most recent translation to be published was the monumental biography Goethe: Life as a Work of Art, by Rüdiger Safranski. David Dollenmayer lives in Hopkinton, Massachusetts.
Loading...
or
Not Currently Available for Direct Purchase