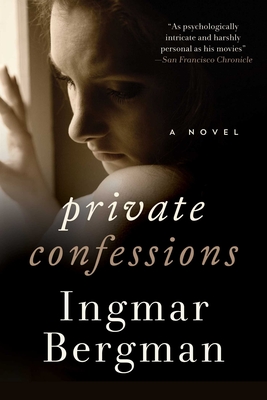 Available again from the Bergman centenary comes an elegant novel structured as a series of five “conversations” that reveal Bergman’s mastery of dialogue and gift for setting.

Revisiting the autobiographical themes he first explored in his novel The Best Intentions, Ingmar Bergman’s Private Confessions presents the relationship between Anna, an impetuous young woman, and her husband Henrik, a somber pastor, living in 1920s Sweden. Imprisoned in a stifling marriage, which she rushed into against her mother’s wishes, Anna begins an affair with Tomas, a theology student. While she seems to find in her affair the pleasure that is lacking in her marriage, Anna is soon overcome with guilt and engages in a series of “confessions” to those closest to her—her childhood pastor, her mother, her best friend, even her husband. Each conversation reveals more of what drove Anna to her infidelity: a loveless marriage, a search for forgiveness, a questioning of God yet a need to have faith in something. However, with each successive conversation we also come to realize that Anna can obtain neither solace nor absolution from her confessors.

With the vividly poetic imagery and dialogue one would expect from Bergman, Private Confessions poignantly explores the complexities of human relationships and the universal need for love.

Praise For Private Confessions: A Novel…

"As psychologically intricate and harshly personal as his movies."—San Francisco Chronicle

"Confessions is a searing drama of adultery, secrets, lies, and lifelong guilt."—Chicago Tribune

"A vibrant and moving addition to what begins to look more and more like a great work in progress."—Kirkus Reviews

"A dark gem of a novel, set in resonant prose as elegant as a classical sonata."—Publishers Weekly.

"Because every line is saturated with juice, with the sense of life, you feel, in addition to life as it is, life as it ought to be."—New York Times Book Review

"In words, as in cinematic images, Bergman shapes settings and characters that immediately come alive and subtly express the depths of human emotions and experience."—Houston  Chronicle

"A Nobel for Ingmar? He deserves one many times over."—Kirkus Reviews

"The closest thing imaginable to a Bergman film without pictures or sound."—New York Times

Ingmar Bergman is recognized as a giant of the cinema and stage, and was an influential director, writer, and producer. He is known for such classic films as The Seventh Seal, Wild Strawberries, Persona, Cries and Whispers, and Fanny and Alexander. Private Confessions is the final book in the trilogy that includes The Best Intentions and Sunday’s Child, also published by Arcade. He died in 2007 in Sweden.
Loading...
or
Not Currently Available for Direct Purchase