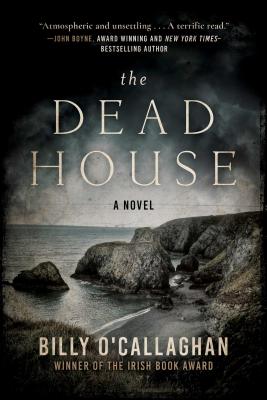 Sometimes the past endures—and sometimes it never lets go.

This best-selling debut by an award-winning writer is both an eerie contemporary ghost story and a dread-inducing psychological thriller. Maggie is a successful young artist who has had bad luck with men. Her last put her in the hospital and, after she’s healed physically, left her needing to get out of London to heal mentally and find a place of quiet that will restore her creative spirit. On the rugged west coast of Ireland, perched on a wild cliff side, she spies the shell of a cottage that dates back to Great Famine and decides to buy it. When work on the house is done, she invites her dealer to come for the weekend to celebrate along with a couple of women friends, one of whom will become his wife. On the boozy last night, the other friend pulls out an Ouija board. What sinister thing they summon, once invited, will never go.

Ireland is a country haunted by its past. In Billy O'Callaghan's hands, its terrible beauty becomes a force of inescapable horror that reaches far back in time, before the Famine, before Christianity, to a pagan place where nature and superstition are bound in an endless knot.

Praise For The Dead House: A Novel…

“Still you keep reading, half-believing that dark forces are stirring, the way you might feel a planchette sliding across a Ouija board. Is it really happening? Or are you convincing yourself there’s more going on here than there really is? Either way, you enjoy the creepy thrill.”—New York Times Book Review

"A solid addition to the treasury of campfire ghost stories. . . . The past in The Dead House is 'thick as tar,' as one character puts it, and its evils are content to bide their time, waiting for unwary visitors."—Wall Street Journal

"A contemporary ghost story that will chill you to your bones."—Bustle

“Billy O’Callaghan’s The Dead House is a perfectly constructed ghost story, an authentically disquieting tale about the old, old cruelty that lives in the land and never dies. It really did scare me.”—Owen King, author of Double Feature: A Novel and coauthor of Sleeping Beauties

“Atmospheric and unsettling, The Dead House takes the traditions of classic ghost stories and builds on them with a contemporary twist. A terrific read.”—John Boyne, award-winning and New York Times–bestselling author

"A subdued chiller . . . There will be more than a few goosebumps raised before the reader finishes this one."—New York Journal of Books

"I know of no other writer on either side of the Atlantic who is better at exploring the human spirit under assault than Billy O'Callaghan."—Robert Olen Butler, winner of the Pulitzer Prize

"A moving work that builds to an elegiac climax and is a welcome voice to the pantheon of new Irish writing."—Edna O'Brien

"Billy O’Callaghan’s work is at once subtle and direct, warm and clear-eyed, and never less than beautifully written. He has a moving ability to express the hopes and fears of 'ordinary' people, and he knows intimately the ways of the world. This writer is the real thing." —John Banville

“A tale of evil, of desperation, of things older than time . . . all the qualities of the very best ghost stories.”—Fictionophile

"A superb debut novel . . . O'Callaghan slowly unsettles the reader, line by line, as reality is questioned . . . skilfully conjures up a sense of dread, while at the same time creating a psychological internal terror for his characters."—Evening Echo

"The burdens of memory and the effects of isolation certainly run through O’Callaghan’s work to date and The Dead House gives them a space in which the haunting of the past finds its most literal expression: the ghost."—Irish Examiner

"A great tale, well-told . . . O'Callaghan conjures such believable characters that when you close your eyes it’s impossible to believe that they’ve never actually drawn a breath. He delivers a perfect ending to this ghost story ensuring the reader is left haunted, just enough, to have them looking over their shoulder as they climb the stairs to bed."—Susan Condon, writing.ie

"[A] striking debut. . . Billy O'Callaghan casts a fearful gaze into the world of supernatural occurrences."—RTÉ

"The Dead House, with a shiver-inducing final few pages, is a wonderfully mesmerising read, and I loved it."—Liz Robinson, www.lovereading.com

"Fills you with a psychological dread that is hard to shake. . . . Impressive."—writerfulbooks.com

"In a first-person voice unlike any other I’ve come across, O’Callaghan gifts us with a story that unfolds in just the way you’d want to hear it by the fireside . . best not read at night. And yet I’d be hard-pressed to label The Dead House a ghost story; though it is that, it is more. . . . All praise The Dead House. Do yourself a favor and get ahold of this book."—thewildgeese.irish
"Imaginative . . . O’Callaghan’s descriptive prose brings the Irish countryside vibrantly to life.”— Book Reviews and More by Kathy

“Fans of gothic, psychological thrillers will definitely like this one.”— Jeanea's Book Obsession

“. . . Still you keep reading, half-believing that dark forces are stirring, the way you might feel a planchette sliding across a Ouija board. Is it really happening? Or are you convincing yourself there’s more going on here than there really is? Either way, you enjoy the creepy thrill.”—New York Times Book Review

"A solid addition to the treasury of campfire ghost stories. . . . The past in The Dead House is 'thick as tar,' as one character puts it, and its evils are content to bide their time, waiting for unwary visitors."—Wall Street Journal

Billy O'Callaghan is the author of several short story collections: The Things We Lose, the Things We Leave Behind which won the Irish Book Award, and In Exile and In Too Deep. He was a finalist for the 2016 COSTA Short Story Award, the Glimmer Train Prize, the Faulkner Wisdom Prize, and the Seán Ó Faoláin Award and has published his stories widely on both sides of the Atlantic. He resides in Douglas, County Cork, Ireland.
Loading...
or support indie stores by buying on
(This book is on backorder)