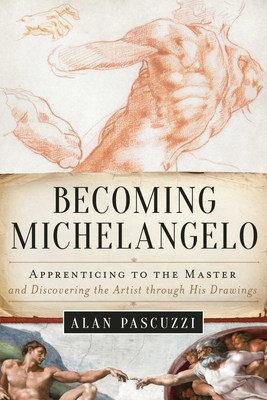 Apprenticing to the Master, and Discovering the Artist through His Drawings

Many believe Michelangelo's talent was miraculous and untrained, the product of “divine” genius—a myth that Michelangelo himself promoted by way of cementing his legacy. But the young Michelangelo studied his craft like any Renaissance apprentice, learning from a master, copying, and experimenting with materials and styles. In this extraordinary book, Alan Pascuzzi recounts the young Michelangelo’s journey from student to master, using the artist’s drawings to chart his progress and offering unique insight into the true nature of his mastery.

Pascuzzi himself is today a practicing artist in Florence, Michelangelo’s city. When he was a grad student in art history, he won a Fulbright to “apprentice” himself to Michelangelo: to study his extant drawings and copy them to discern his progression in technique, composition, and mastery of anatomy. Pascuzzi also relied on the Renaissance treatise that “Il Divino” himself would have been familiar with, Cennino Cennini's The Craftsman’s Handbook (1399), which was available to apprentices as a kind of textbook of the period.

Pascuzzi’s narrative traces Michelangelo’s development as an artist during the period from roughly 1485, the start of his apprenticeship, to his completion of the Sistine Chapel ceiling in 1512. Analyzing Michelangelo’s burgeoning abilities through copies he himself executed in museums and galleries in Florence and elsewhere, Pascuzzi unlocks the transformation that made him great. At the same time, he narrates his own transformation from student to artist as Michelangelo’s last apprentice.

Praise For Becoming Michelangelo: Apprenticing to the Master, and Discovering the Artist through His Drawings…

“A remarkable inquiry into artistic creation. . . . This revelatory book is a must for art students and those seeking new insights into [Michelangelo’s] art.”—Kirkus Reviews

"Bernini, Picasso, and Mozart were prodigies; not Michelangelo. He worked hard to become a genius. This wonderfully readable and personal account of Michelangelo’s early years reminds us that that becoming a genius requires work and unwavering dedication. Alan Pascuzzi, an accomplished historian and—equally important—a highly successful, sensitive, and insightful artist, combines a rare set of skills that permits him to tell the story of how an unlikely Florentine became the greatest artist of all time. Michelangelo did it. After reading this book, you too might feel the inspiration 'to create masters out of mere mortals like us.'”—William E. Wallace, Barbara Murphy Bryant Distinguished Professor of Art History, Washington University in St. Louis

"This original personal meditation on Michelangelo, audaciously maps out how the artist drew with the diligence of a methodical craftsman and raised his art to the level of genius, all in the grand context of those turbulent times.From the micro to the macro, a wonderful romp through Michelangelo's heart and mind!"—Terence Ward, author of The Guardian of Mercy: How an Extraordinary Painting by Caravaggio Changed an Ordinary Life Today

“In our digital age, when many artists dismiss the foundational importance of drawing, Becoming Michelangelo provides a powerful counterpoint. As a college student three decades ago, Alan had one goal: to get inside the head (and hands) of the great Renaissance artists. Now a PhD art historian, and a master painter and sculptor specializing in Renaissance techniques, Alan is in a unique position to provide insights into the physical, conceptual, and aesthetic aspects of some of the greatest art ever produced. Becoming Michelangelo is a riveting account of a process of discovery that no one has ever undertaken before.”—Ron Netsky, professor of art, Nazareth College

“Alan Pascuzzi tells the fascinating story of what happened when he started copying Michelangelo’s drawings and soon found himself virtually apprenticed to the master. Attempting to ‘become’ Michelangelo, he developed a unique appreciation of how Michelangelo himself became the graphic artist we recognize and admire today. General readers will appreciate Pascuzzi’s fast pace and down-to-earth tone, full of observations and insights that are sure to open the eyes of experts, too.”—Gary M. Radke, professor emeritus of art history, Syracuse University

Alan Pascuzzi is a painter, sculptor, and professor of art history who received a Fulbright scholarship to travel to Florence and apprentice himself to Michelangelo. He copied all 135 of Michelangelo's extant drawings from the period covered in his book from originals in various museums. He has been teaching Renaissance art techniques to students for more than a decade. He has appeared in TV documentaries on Renaissance art, including the BBC's The Color Blue and Inside the Mind of Leonardo and on 60 Minutes. He lives in Florence.
Loading...
or
Not Currently Available for Direct Purchase