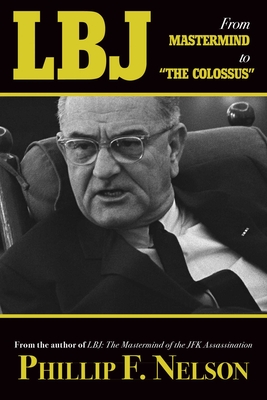 From Mastermind to ?The Colossus?

Phillip F. Nelson’s new book begins where LBJ: The Mastermind of the JFK Assassination left off. Now president, Johnson begins to push Congress to enact long-dormant legislation that he had previously impeded, always insisting that the timing wasn't right. Nelson argues that the passage of Johnson’s “Great Society” legislation was designed to take the focus of the nation off the assassination as well as lay the groundwork for building his own legacy.

Nelson also examines Johnson’s plan to redirect US foreign policy within days of becoming president, as he maneuvered to insert the US military into the civil war being fought in Vietnam. This, he thought, would provide another means to achieve his goal of becoming a great wartime president. In addition, Nelson presents evidence to show that the Israeli attack on the USS Liberty in 1967 was arguably directed by Johnson against his own ship and the 294 sailors on board as a way to insert the US military into the Six-Day War. It only failed because the Liberty refused to sink.

Finally, Nelson presents newly discovered documents from the files of Texas Ranger Clint Peoples that prove Johnson was closely involved with Billie Sol Estes and had made millions from Estes’s frauds against taxpayers. These papers show linkages to Johnson’s criminal behavior, the very point that his other biographers ignore.

Phillip F. Nelson is the author of LBJ: The Mastermind of the JFK Assassination. After college, a stint in the Peace Corps, and a corporate career, he began an intensive study of the JFK assassination, Johnson's presidency, and his continuing criminal conduct. The author resides in Ijamsville, Maryland.
Loading...
or
Not Currently Available for Direct Purchase