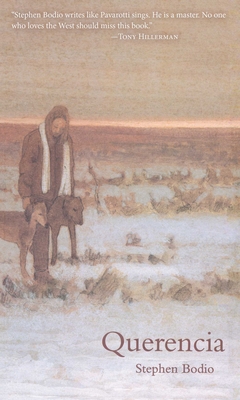 Born in Boston, Stephen Bodio wandered into Magdalena, New Mexico, in the 1970s while on his way to Montana and never left. He was accompanied by Betsy Huntington, who was twenty years his senior; the couple had been inseparable from the day they met. After stumbling upon a vintage home along the highway, they settled into a country life; it was the perfect way for the two of them to make their lives together in an out-of-the-way place.

It’s through Bodio that Betsy’s story is painted in such memorable passages that soon captivate readers. Together they made their home among the mountains of New Mexico, returning to a simple life of hunting, falconry, and becoming acquainted with the local reptiles and insects of the desert. A lover of nature, Bodio here explains in vivid detail his time spent in the wilderness. He found himself the center of his neighbors’ attention when they discovered his endless fascination with the local fauna, from snakes and birds to coursing dogs. He became accustomed to Magdalena through the people and wildlife, even joining in the biggest festival on the calendar: the Quemado Rodeo, better known by locals as the Street Dance and Brawl.

From the Spanish term meaning “the heart’s true home,” Querencia captivates and settles the heart. It is an astonishing read for those looking for an escape from the hustle of the big city, or just seeking to find solitude in the country life.

Stephen Bodio is a renowned writer and naturalist. He was the longtime book reviewer for Gray’s Sporting Journal, and his articles have appeared in magazines and papers as various as the LA Times, Atlantic Monthly, Men’s Journal, Sports Illustrated, and Smithsonian. Bodio is also the author of several books, including Aloft, On the Edge of the Wild, and Eagle Dreams. He loves to travel and write about it, and still lives in Magdalena, New Mexico.

Malcolm Brooks is a carpenter by trade, and his fiction and essays have appeared in a variety of publications, including Montana Quarterly, Sports Afield, and Fly Lines: The Best of Big Sky Journal Fishing. He is the author of the novel Painted Horses, and resides in Missoula, Montana.
Loading...
or
Not Currently Available for Direct Purchase