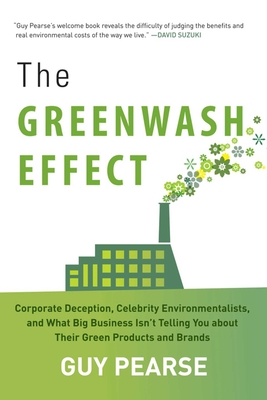 Corporate Deception, Celebrity Environmentalists, and What Big Business Isn?t Telling You about Their Green Products and Brands

Going green is the new black for big business. But how real is the climate-friendly revolution that’s being advertised? Toyota would like us to think that Mother Nature drives a Prius, Ford wants us to “Join the Green Revolution,” and McDonald’s has painted its golden arches green. Facebook has even “friended” Greenpeace. All across the globe big corporations are spending big bucks trying to convince us that their policies, actions, and products are earth friendly. But are big brands and the celebrities endorsing them really as green as they claim?

In The Greenwash Effect, Guy Pearse looks behind the corporate façade in the tradition of Fast Food Nation and No Logo—and what he finds will startle you. Nothing is sacred and no one is safe from scrutiny: not the World Wildlife Fund or Earth Hour, not Apple or Google, not Oprah or Leonardo DiCaprio. The Greenwash Effect is an entertaining and practical book that helps consumers to pick the truly green businesses from the greenwashers and to demand a higher environmental standard from all.

Guy Pearse is a former political adviser, lobbyist, and speechwriter. His work as an author and columnist focuses heavily on how politicians and corporations mislead the public about their response to major environmental concerns. His previous books include Big Coal: Australia’s Dirtiest Habit, Quarry Vision: Coal, Climate Change and the End of the Resources Boom, and High & Dry: John Howard, Climate Change and the Selling of Australia’s Future.
Loading...
or
Not Currently Available for Direct Purchase