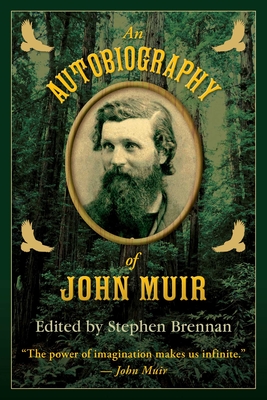 An Autobiography of John Muir

Biographer Steven J. Holmes once wrote that John Muir was "one of the patron saints of twentieth-century American environmental activity." In his lifetime, the engineer, author, biologist, and activist worked alongside powerful men such as President Theodore Roosevelt, railroad executive E. H. Harriman, and conservationist Gifford Pinchot. Muir was responsible for the creation of the Sierra Club and he played an important role in preserving the Yosemite Valley and Sequoia National Park.

During his lifetime, Muir published six different volumes of nature and personal writing. After his death in 1914, four more volumes were discovered and released. In An Autobiography of John Muir, editor Stephen Brennan brings to light the many accomplishments of Muir's life through the naturalist's own nonfiction works, including The Story of My Boyhood and Youth and My First Summer in the Sierra.

Through the essays featured in this book, readers will learn of Muir's childhood, which was split between Scotland and a farm in Wisconsin. They will travel the world with him, from the High Mountains to the Mono Trail, the Bloody Canyon, Yosemite, and everywhere in between.

Stephen Brennan is the author of The Adventurous Boy’s Handbook and The Adventurous Girl’s Handbook. He has also edited and arranged An Autobiography of Theodore Roosevelt and An Autobiography of General Custer, among others. He has worked as a circus clown, book editor, teacher, cabaret artist, actor, director, shepherd, and playwright. He resides in New York City and West Cornwall, Connecticut.
Loading...
or support indie stores by buying on
(This book is on backorder)