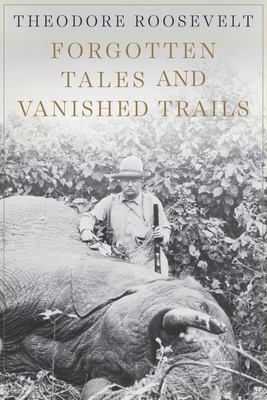 Forgotten Tales and Vanished Trails gathers together Roosevelt’s many writings on game hunting and the outdoors from the late 1800s to the early 1900s. Published in various magazines and excerpts from his other publications, this collection finally brings the best musings of a great sportsman into a single volume. These articles span topics from hunting typical game animals (buck, wildebeest, and the like) to the hunting of dangerous predators such as wolves and bears; others are tales told around a campfire, of marauding wolves and man-eating bears, or detailing the finer points of ranching. Some pieces span years, while others detail his shorter exploits across the country.

A passionate advocate for the outdoors, Roosevelt’s writing is filled with fascinating insights into a world mostly now lost to civilization and commerce. Many of his comments on the precarious balance of the natural world are noted in this volume, and his chapters on conservation and the responsibility of hunters reflect his ever-present interest in preserving the environment for the benefit of generations to come.

Theodore Roosevelt was the twenty-sixth president of the United States of America. One of America’s most popular presidents, Roosevelt was an avid outdoorsman and historian, and a vivacious reader; he contributed hundreds of books to the literary world, writing of his adventures in Africa and South America. Roosevelt passed away in 1919 at the age of sixty.
Loading...
or
Not Currently Available for Direct Purchase