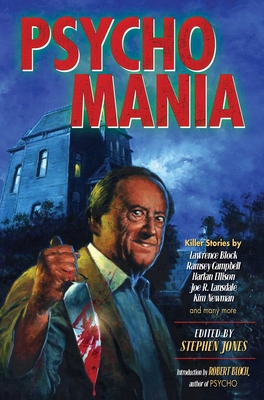 When journalist Robert Stanhope arrives at the Crowsmoor asylum for the criminally insane to interview the institutes enigmatic director, Dr. Lionel Parrish, little does he realize that an apparently simple series of tests will lead him into a terrifying world of murder and insanity…

In this chilling new anthology, compiled by multiple award-winning editor Stephen Jones, some of the biggest and brightest names in horror and crime fiction come together to bring you twisted tales of psychos, schizoids, and serial killers with occasional supernatural twists.

An original wraparound sequence in the style of John Llewellyn Probert sets the tone for this dark collection of stories, as well as a hitherto unpublished introduction by Robert Bloch, author of Psycho and the inspiration for Alfred Hitchcock’s famous film.