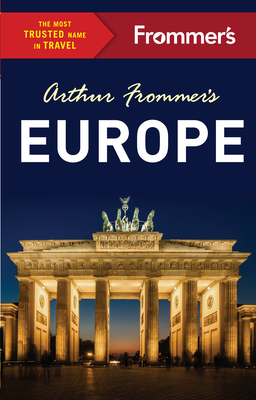 The 800-plus pages of this four-color book mark a milestone in European travel writing. It was Arthur Frommer who first set off an avalanche of travel to Europe, and whose subsequent writings and commentary have constantly expanded that market. And now Arthur Frommer has himself edited (and written personal introductions to) this definitive guidebook to every major nation of the continent. It contains his own insightful (and often controversial) advice and his views are supplemented by the current recommendations of the top experts and European specialists of Frommer's staff. Arthur Frommer, and his hand-picked experts, have created a classic guidebook that will be cherished and used by the many millions who regard him as the foremost expert on thoughtful and rewarding European travel.

The son of a Polish-born mother and an Austrian-born father, Arthur Frommer was drafted into the U.S. Army during the Korean War, but was stationed in Europe because of his fluency in German and Russian. During his service, he wrote and self-published a guidebook called The GI's Guide to Traveling in Europe in 1955 that was an immediate hit among his fellow soldiers. In 1957, Frommer created a civilian version called Europe on 5 Dollars a Day, which became an overnight best seller. He subsequently published guidebooks covering all parts of the globe. Frommer licensed his travel guide book business to Simon & Schuster in 1977. Eventually, the Frommer's series was purchased by John Wiley & Sons, and in August 2012, Google purchased the travel guides. Through all the exchanges, Arthur Frommer was always deeply involved with the guide books. In 2013, Frommer reacquired control of the guidebooks bearing his name and has come full circle, now self-publishing his iconic travel books again. Additionally, Arthur Frommer writes a travel column syndicated through King Features with his daughter Pauline Frommer, with whom he also co-hosts a weekly syndicated radio show, "The Travel Show with Arthur & Pauline Frommer." Arthur resides in New York City. Stephen Brewer has been writing travel guides for almost three decades. As an editor and writer, he has focused on European coverage for such magazines as Esquire, Connoisseur and Geo. He has written several previous guides for Frommer's and Insight, as well as authoring Beautiful Small Coastal Towns for Rizzoli. Stephen resides in New York City. Jason Cochran was twice awarded Guide Book of the Year by the Lowell Thomas Awards (Society of American Travel Writers) and once by the North American Travel Journalists Association. His writing has appeared in the New York Post, Entertainment Weekly, Travel + Leisure, USA Today, and Budget Travel, among many others. Jason has appeared as a host and commentator on CBS, Fox and AOL, to name a few. He currently edits Frommers.com. Jason resides in New York City. Author, photographer and travel writer Teresa Fisher has had a life-long love affair with Switzerland, since her first visits to the ski slopes as a young child. Since then she has written extensively on the country for a variety of publishers including Frommer's, National Geographic and Thomas Cook. She is National Geographic Expeditions' Switzerland expert and lecturer. She has also penned over thirty guidebooks and children's travel reference books on a wide variety of destinations worldwide, and features periodically on BBC local radio as a travel adviser. Her travel features have appeared in such British publications as The Daily Telegraph, The Sunday Telegraph and the Sunday Times. For seven years, she lived in the Alps. Now, a mother of two, a fluent French and German speaker and a graduate in classical music, she is based in Gosport in the UK, but still spends much of her time skiing, sight-seeing or hiking in the Swiss Alps. Lucy Gillmore was the deputy travel editor at The Independent, but after eight years on the travel desk left London to move to Scotland. She specializes in travel and food and writes for newspapers such as The Guardian, The Independent and The Times and magazines including Food and Travel, Olive, House & Garden and Conde Nast Traveller. She also updated the Wallpaper City Guide to Edinburgh. After a couple of years in Edinburgh she headed even further north and now lives in the hills above Loch Ness in the Highlands. Patricia Harris and David Lyon drove almost every twisting mountain road as they researched three previous Frommer's guidebooks about Spain. As much as they enjoy the countryside, they find themselves inexorably drawn to the great cities of Madrid and Barcelona, where Spanish life and culture are writ large. Founders of HungryTravelers.com, they have a deep appreciation for the perfect codfish croqueta, an honest plate of patatas bravas, or a heap of peel-and-eat-garlic shrimp, ideally consumed at an outdoor table in one of Barcelona's ancient squares or at the crowded bar in a Madrid taberna. They write about travel, food, wine, spirits and contemporary art for journals as varied as the Robb Report, the Boston Globe and Westways. They reside in Boston, MA. Stephen Keeling has written for Frommer's for two decades. He has also written for the Independent, Daily Telegraph, various travel magazines, and numerous travel guides as well as authored the award-winning Frommer's Family Travel Guide to Tuscany and Umbria. Stephen resides in New York City. John Newcombe is a veteran travel journalist residing in Vienna, Austria. Margie Rynn has been living and writing about France for over 13 years. The author of Pauline Frommer's Paris, she has also written features for several travel magazines, as well as Time Out New York and Yoga Journal. In a previous New York life, she acted in a Broadway play and performed her own one-woman show. Margie is married to a kind and understanding Frenchman and they have a lovely twelve year old son. She lives in Paris. Donald Strachan is a writer and journalist who has written about Italy for publications worldwide, including National Geographic Traveler, the Guardian, Sunday Telegraph, and the Independent. He resides in London, England.
or support indie stores by buying on
Copyright © 2020 American Booksellers Association