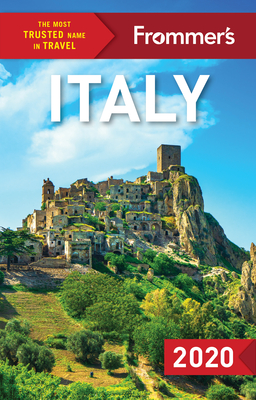 From the most trusted name in travel, Frommer's Italy 2020 is a comprehensive, completely up-to-date guide to one of Europe's most storied vacation destinations. With helpful advice and honest recommendations from Frommer's expert authors, you'll walk among the ancient ruins of Pompeii, float along the canals of Venice, appreciate Renaissance masterworks in Florence, explore off-the-beaten-path Puglia and live la dolce vita in Rome―as well as discover timeless wonders such as the vineyards of Tuscany and cliff-top towns perched along the Amalfi Coast.
Inside the guide:
- Full-color photos and helpful maps, including a detachable foldout map
- Detailed itineraries for planning your trip to suit your schedule and interests (and help you avoid lines and crowds)
- Compelling cultural information so that you'll better understand the history, cuisine, and traditions of Italy
- Candid reviews of the best restaurants, historic sights, museums, tours, shops, and experiences―and no-punches-pulled info on the ones not worth your time and money
- Accurate, up-to-date info on transportation, useful websites, telephone numbers, and more
- Budget-planning help with the lowdown on prices and ways to save money, whether you're traveling on a shoestring or in the lap of luxury About Frommer's: There's a reason Frommer's has been the most trusted name in travel for more than 60 years. Arthur Frommer created the best-selling guide series in 1957 to help American servicemen fulfill their dreams of travel in Europe, and since then, we have published thousands of titles, become a household name, and helped millions upon millions of people realize their own dreams of seeing our planet. Travel is easy with Frommer's.

Stephen Brewer has been writing travel guides for three decades. As an editor and writer, he has focused on European coverage for such magazines as Esquire, Connoisseur and Geo, and he was a producer of a popular radio travel show for many years. He has written several previous guides for Frommer's, Insight, and other companies, as well as authoring Beautiful Small Coastal Towns for Rizzoli. Stephen divides his time between Manhattan and Italy. He has written for Frommer's since 2007, as well as The Independent, Daily Telegraph, various travel magazines, and numerous travel guides. Stephen resides in New York City.A longtime contributor to Frommer's guides, Elizabeth Heath is a writer and editor based in Umbria, central Italy, from where she writes about travel and culinary adventures in Italy, Europe and farther afield. Her work has appeared in Huff Post, The Telegraph, Cara, and other outlets. She recently authored a book on the architecture of Rome. Michelle Schoenung is an American journalist and translator in Milan who relocated to the Belpaese in 2000 for what was to be a yearlong adventure. Almost two decades later, she is pleased that Milan has evolved into a much more international and cosmopolitan city and has shed its image of merely being a foggy northern Italian business hub. Her writings and translations have appeared in magazines and books in the United States and Italy. In her free time, she likes to read, run, travel and explore the city with her two rambunctious Italian-American bambini. She resides in Milan, Italy. Donald Strachan is a travel writer and journalist who has written about Italy and Europe for publications worldwide, including National Geographic Traveller, The Guardian, Telegraph, and CNN.com. He lives in London, England.
Loading...
or
Not Currently Available for Direct Purchase