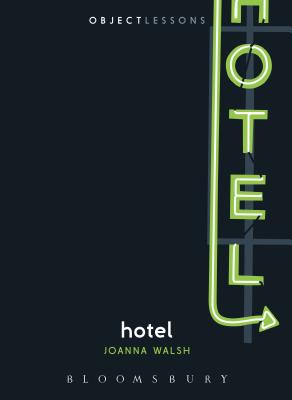 During the breakdown of an unhappy marriage, writer Joanna Walsh got a job as a hotel reviewer, and began to gravitate towards places designed as alternatives to home. Luxury, sex, power, anonymity, privacy...hotels are where our desires go on holiday, but also places where our desires are shaped by the hard realities of the marketplace. Part memoir and part meditation, this book visits a series of rooms, suites, hallways, and lobbies-the spaces and things that make up these modern sites of gathering and alienation, hotels. Object Lessons is published in partnership with an essay series in The Atlantic.

Joanna Walsh is a writer based in England. Her work has been published by Granta, Dalkey (Best European Fiction 2015), Salt (Best British Short Stories 2014 and 2015), Tate, and others. Her books include Fractals (2013), and Vertigo (The Dorothy Project, 2015). She reviews for The Guardian, The New Statesman, and The National (UAE). She is fiction editor at 3: AM Magazine, and runs #readwomen, described by the New York Times as "a rallying cry for equal treatment for women writers." She is also an illustrator.
Loading...
or
Not Currently Available for Direct Purchase