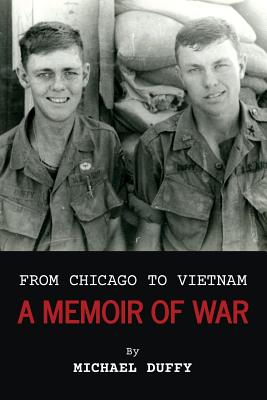 From Chicago to Vietnam

A Memoir of War

In the early hours of January 31, 1968, eighty-thousand North Vietnamese and Vietcong combat troops attacked every major city and military base in South Vietnam. The perimeter of the massive Saigon Airbase, Tan Son Nhut, was breached, and fighting raged all morning.
Both gritty and intimate, From Chicago to Vietnam tells the powerful story of the ensuing epic battle, the Tet Offensive, from the perspective of one brave American soldier, Michael Duffy, whose life, like so many others, would forever be changed.
Duffy's war experience begins when he exits a C-130 cargo plane onto the Tan Son Nhut tarmac--a chaotic scene of blasts, explosions, and small arms fire. Sprinting to a waiting helicopter, he is lifted up and over the city, where he gets a bird's-eye view of Saigon under attack. The helicopter lands on a road outside Bien Hoa Base Camp, and Duffy crawls in under enemy fire, tumbling into a fox-hole under cover of two GIs. Later, he meets up with his younger brother, Danny Duffy, in an ammunition convoy driving up Highway 1 to the village of Xuan Loc.
After his brutal one-year tour in Vietnam, Duffy returns to Chicago, where he enjoys a Christmas dinner with his family before enrolling as a freshman at Colorado College. Like many vets, his return from the war would be met with curiosity, indifference, and, at times, scorn. This harrowing memoir was thirty years in the making.