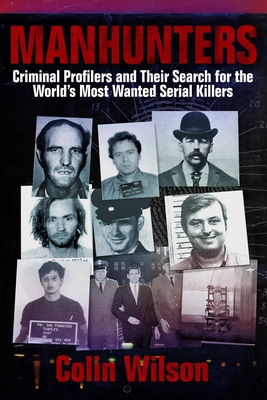 Criminal Profilers and Their Search for the World?s Most Wanted Serial Killers

Author Colin Wilson opens this illuminating psychological discussion with the development of the 1977 Behavioral Science Unit, which was set up in order to answer the many questions surrounding serial killers: How does someone become a serial killer? How do they choose their victims, and why do they not feel remorse? How are they caught? Wilson interviews FBI Special Agent Robert Ressler, coiner of the term “serial killer” and one of the pioneers of criminal profiling, as well as Ted Bundy and Charles Manson in order to figure out the motives behind their grisly actions.

In Manhunters, by tracking the BSU’s development of psychological profiling and genetic fingerprinting, Wilson reveals the forensic investigations that caused the seizure and arrest of some of the most vile and villainous people in the world, including Jeffrey Dahmer, William Heirens, Peter Sutcliffe, John Duffy, Jerry Brudos, Wayne Williams, and many more. As he divulges the details of each case, the murderers’ fantasy worlds, sadistic motives, and monstrous psychological tendencies emerge.

Colin Wilson has written more than one hundred books as well as hundreds of articles around the topics of philosophy, crime, and the occult. The Outsider is his most well-known title, and he is also the author of A Criminal History of Mankind, Encyclopedia of Murder, The Mammoth Book of True Crime, A Plague of Murder, and The Serial Killers.
Loading...
or
Not Currently Available for Direct Purchase