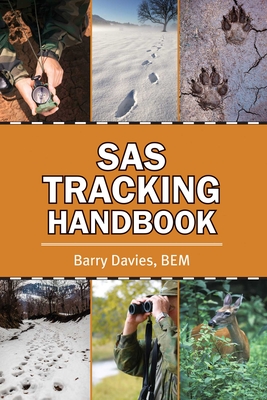 Tracking originated with man’s need for food; he needed to understand what he was following and what the rewards would be if he was successful. Little has changed over time about the terms of tracking. We still track game for sport and food, but we have also found other uses for tracking. Border police patrol to stop illegal immigrants from entering their country; the military tracks down wanted terrorists or enemy forces. Tracking has become a military skill.

In the SAS Tracking Handbook, former SAS soldier and British Empire Medal (BEM) award–winner Barry Davies teaches not only how to survive in the outdoors with the skills of tracking, but how to use these skills from a military standpoint.

Included in this book are many helpful tips on topics including:

The types of dogs used for tracking.
Traps for catching wild animals.
Modern military tracking.
Using your surroundings to your advantage.
And much more.

The success or failure of the modern tracker is dependent on the personal skills of the individual tracker. Training is vital in learning tracking skills, and continuous exercise the best way to interpret signs. These skills are rarely found, but they remain hidden deep within all of us. So whether you’re already a skilled tracker or a novice in the field, the SAS Tracking Handbook will be your guide to mastering this old and respected art.

Barry Davies, BEM spent eighteen years in the British Special Air Service serving around the globe. He participated in the storming of the hijacked Lufthansa plane at Mogadishu in 1977 and was awarded the British Empire Medal. He is also the author of Soldier of Fortune Guide to How to Become a Mercenary, Soldier of Fortune Guide to How to Disappear and Never Be Found, The SAS Self-Defense Handbook, and Modern Survival. He lives in Cardiff, UK.
Loading...
or
Not Currently Available for Direct Purchase