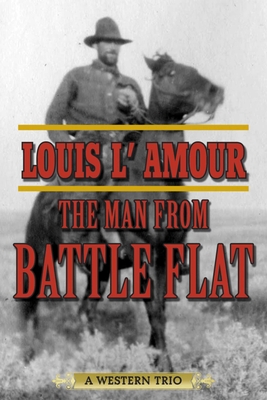 The Man from Battle Flat (Paperback)

Louis L’Amour brings the Wild West back to life in three unstoppable adventures!

“Mistakes Can Kill You” is the story of Johnny O’Day. Half-dead from pneumonia and on the brink of giving up, he was taken in as a boy and nursed back to health by a young couple. Growing up, Johnny harbored nothing but resentment and jealousy of their biological son, Sam. But now Sam is in big trouble, and it seems that Johnny may be the only person who can come between his half brother and a pair of gunmen.

Ross Haney is “The Rider of Ruby Hills.” At twenty-seven, he’s broke, armed, and ready to settle down. But when a feud breaks out between the owners of two of the biggest spreads in Ruby Hills, it looks like the fair town is on the brink of destruction. Ross was a loner at first, but now he’s got allies and a plan . . .

In the title story, Krag Moran is a rider who becomes involved in a range war among ranchers and nesters. The town is divided, and by the time shots are fired and the body count starts to rise, Krag will have a lot of explaining to do to the wrong people.

Louis L'Amour was born Louis Dearborn LaMoore in Jamestown, North Dakota, in 1908. He published his first work at the age of eighteen and went on to write scores of adventure and Western stories, becoming one of the most popular writers of all time. He died in 1988 at his home in Los Angeles.

Praise For The Man from Battle Flat: A Western Trio…

“L’Amour is the kind of storyteller who makes the wolves come out of the woods to listen.”
—People magazine

“A strong case may be made that L’Amour was the most popular American writer of the 20th century.”—The Wall Street Journal

“L’Amour is the kind of storyteller who makes the wolves come out of the woods to listen.”
—People magazine

“A strong case may be made that L’Amour was the most popular American writer of the 20th century.”—The Wall Street Journal
or support indie stores by buying on
(This book is on backorder)
Copyright © 2020 American Booksellers Association