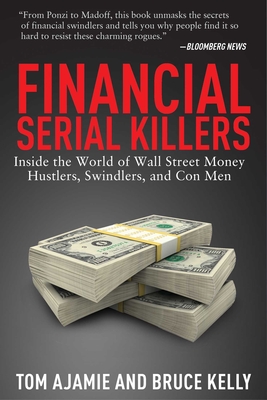 Inside the World of Wall Street Money Hustlers, Swindlers, and Con Men

By using true tales of thieves, swindlers, and fraudsters at work, Financial Serial Killers illustrates how these perpetrators get their hooks into investors’ wallets, savings accounts, and portfolios—and never let go. The worst financial crisis since the great depression revealed that thousands of mom-and-pop investors had lost millions to so-called Mini-Madoffs. They are the thieves and con men who had used phony financial acumen to steal investors’ money, wipe out savings, and damage lives.
Financial Serial Killers reveals the cons (from the grand to picayune) advisers cultivate with their victims—relationships that are essential to the fraud. Take the story of Lillian, the little old lady who invested with Warren Buffett, one of the richest men in the world. After her husband died, she thought her family’s treasure of $24 million in stock controlled by Buffett was safe. It was—until a relative introduced the eighty-nine-year-old grandmother to a pair of unscrupulous insurance agents who convinced her to reinvest her savings in life insurance—decimating her nest egg while padding the agents’ pockets. Lillian’s story, as well as other accounts of deceit and fraud, is the core of Financial Serial Killers. Readers will learn how to better protect their family’s wealth and savings after reading this book.

Tom Ajamie is one of the top trial lawyers in the United States and has a long track record of successfully suing financial criminals both domestically and internationally. He has recovered hundreds of millions of dollars—including the largest stock arbitration award in US history, $429 million—from fraudulent individuals, corporations and organized criminal organizations. Ajamie has provided insight and analysis on corporate and financial crimes for leading media outlets, including ABC, CNN, CNBC, NPR, the BBC, The Wall Street Journal, The New York Times, Forbes, Financial Times, BusinessWeek, and Newsweek. He lives in Houston, Texas.

Bruce Kelly is the news editor for Investment News, the leading trade publication for the investment advice business. An award winning journalist, Kelly writes about Wall Street, securities regulation, brokerage firms, and fraud, and was covering the collapse of Ponzi schemes and damage to investors more than a year before Bernie Madoff admitted his $65 billion fraud in December 2008. He lives in New York City, New York.
Loading...
or
Not Currently Available for Direct Purchase