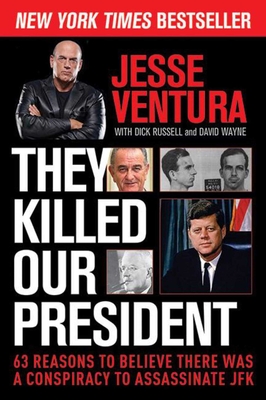 They Killed Our President (Paperback)

63 Reasons to Believe There Was a Conspiracy to Assassinate JFK

The New York Times bestseller that offers all the evidence on the biggest conspiracy in American history—the assassination of President John F. Kennedy.

It’s been more than fifty years since John F. Kennedy was assassinated, and it’s time we all fully understood the facts, theories, and myths surrounding the plot to assassinate the president. New York Times bestselling authors Jesse Ventura, Dick Russell, and David Wayne have created a compendium that covers every possible scenario—from the plot to the murder to the cover-up.

They Killed Our President discusses the most famous of theories, such as the second shooter on the grassy knoll, and also brings to light new and recently discovered testimony and reports, which show that elements of the United States government were behind the plot and took every step to make sure that the truth would never be revealed. Chapters include:

No stone is left unturned, no document left unread in the research behind They Killed Our President. After reviewing the sixty-three reasons in this book, you will find it undeniable that President Kennedy’s death was a product of conspiracy.

Dick Russell has written for such varied publications as Time, Sports Illustrated, and the Village Voice.His books include The Man Who Knew Too Much, Black Genius, and On the Trail of the JFK Assassins. He is also the coauthor of several New York Times bestsellers, including American Conspiracies, 63 Documents the Government Doesn't Want You to Read, and They Killed Our President.

David Wayne is the author of five bestselling books, including Dead Wrong: Straight Facts on the Country's Most Controversial Cover-ups and Hit List: An In-Depth Investigation into the Mysterious Deaths of Witnesses to the JFK Assassination (both written with Richard Belzer). He lives in Honolulu, Hawaii.
or support indie stores by buying on
Copyright © 2020 American Booksellers Association