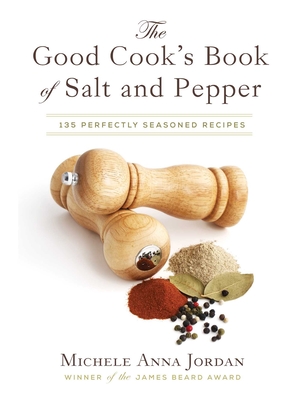 The Good Cook's Book of Salt and Pepper

“It amazes me that so little has been written about the two foods we eat most often. Here is a book that tells us about these two ingredients—one essential to life, the other the flavor of almost everything we eat. . . . A book like Ms. Jordan’s is long overdue.” —James Peterson

Salt is indispensable. Pepper is superfluous. Michelle Anna Jordan guides you through this cookbook where “saltandpepper” is a one-word dictionary term in her kitchen vocabulary. You’ll learn all there is to know about salt and pepper, even so far as to where and how they grow. This exquisite cookbook will go over the necessities of salt, and the luxury of pepper via 135 seasoned recipes. Serve your friends, family, and party guests with delicious recipes and first-hand facts behind the science of one of the culinary world’s dynamic duos.

The Good Cook’s Book of Salt and Pepper separates itself from other competitors by offering scientific facts, a healthier exposure to salt and pepper, and some interesting worldwide trivia. Did you know that India produces the leading amount of pepper and that the United States is its largest consumer? Did you know that shrimp and small crustaceans cooked with spices are common throughout Asia and South America? And that salt is an essential ingredient in coaxing out the flavor of nearly all grains?

Michele Anna Jordan has written nearly twenty books about food, including the highly acclaimed Vinaigrettes and Other Dressings and More than Meatballs!. She has received numerous awards, including a James Beard Award, for her writing, her radio show, and her work as a chef. Today, she writes for the Santa Rosa Press Democrat and also produces and hosts Mouthful, the Wine Country’s Most Delicious Hour on KRCB-FM.
Loading...
or
Not Currently Available for Direct Purchase