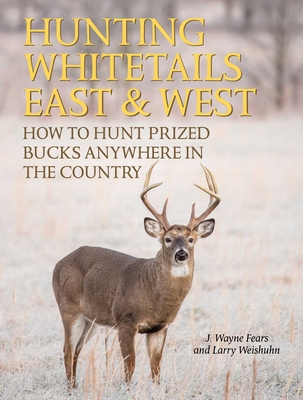 How to Hunt Prized Bucks Anywhere in the Country

From finding prime habitats to creating a plan for success, Hunting Whitetails East & West covers everything related to hunting America’s deer. Each fall, the whitetail deer is sought by millions of hunters throughout the United States and Canada. With the expertise from two men who have decades of hunting experience under their belts, you will learn all that it takes to avoid another “…well, there’s always next year” kind of season.

Learn what it means to be a whitetail hunter through Fears and Weishuhn’s personal anecdotes and stories. Fears’s focus on eastern whitetail combined with Weishuhn’s knowledge of whitetails west of the Mississippi makes Hunting Whitetails East & West the only guide you’ll ever need. Topics covered include best times to hunt, where to hunt, which firearms to use, how to deal with different weather conditions, and much more.

Hunting Whitetails East & West is rich in content and written with both the amateur and the seasoned hunter in mind. Color photographs, maps, and population charts will prove especially useful to beginners, while interviews with the experts and detailed advice will be welcome for anyone.

J. Wayne Fears has a graduate degree in outdoor recreation from the University of Georgia and has written more than fourteen books on the subject. Having written more than three thousand magazine articles, Fears is a member of the Explorer’s Club and was elected to the Legends of the Outdoors Hall of Fame. Fears resides in Huntsville, Alabama.

J. Wayne Fears is a wildlife biologist by training who has organized big-game hunting camps, guided canoe trips, and run commercial getaway operations. Former editor of Rural Sportsman magazine, he has written more than more than twenty books on a variety of subjects ranging from cabin building (including How to Build Your Dream Cabin in the Woods) to survival (The Pocket Outdoor Survival Guide) to cookbooks (including The Complete Book of Dutch Oven Cooking), and more than four thousand articles for major outdoors magazines. A member of the International Dutch Oven Society and an accomplished writer and skilled outdoorsman, Fears lives in Cross Creek Hallow, Alabama.
or
Not Currently Available for Direct Purchase
Copyright © 2020 American Booksellers Association