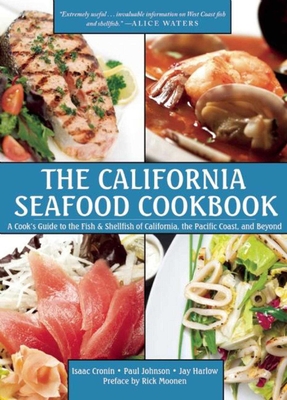 A Cook's Guide to the Fish and Shellfish of California, the Pacific Coast, and Beyond

This beautiful encyclopedic guide to seafood cooking is complete with 150 recipes emphasizing simplicity, fresh ingredients, and ethnic and regional tastes, as well as an innovative approach to the infinite possibilities of this popular cuisine. The seventy-five species portraits and the illustrated techniques will prove useful to cooks and seafood lovers. Fully half of the featured species are found in Gulf, Pacific, and Atlantic waters, and each recipe suggests appropriate alternative fish and shellfish from other regions.

Isaac Cronin is the author and editor of ten non-fiction books, including "Confronting Fear: A Documentary History of Terrorism" and "The Believer," based on the film by Henry Bean that won the Sundance Film Festival Grand Jury Prize in 2001. Cronin was the marketing director for the specialty cookbook publisher Aris Books, worked as a special sales consultant for Publishers Group West and currently manages ICPR, a public relations firm in Berkeley that focuses on sustainable businesses. He co-wrote "Chan Is Missing," a film directed by Wayne Wang that was inducted into the National Film Archive in the Library of Congress.

Paul Johnson is the owner of Monterey Fish Company, a major Bay Area wholesaler, located on Pier 33 in San Francisco. He has become the supplier to chefs such as Thomas Keller, Alice Water, Todd English and Daniel Boulud. A former chef at restaurants such as In Season, he is the author of "Forever Fish."

Jay Harlow is the author or coauthor of many cookbooks, including "West Coast Seafood," "The Microbrew Lover's Cookbook," "Once Upon a Bagel," "Beer Cuisine," "The Art of the Sandwich," "Shrimp," "The Grilling Book," and "The California Seafood Cookbook." His articles have appeared in several food and beverage magazines and newspapers, and his column on seafood, "The Fishmonger," ran for more than ten years as a weekly feature of the "San Francisco Chronicle" food section.

Rick Moonen is a celebrated seafood chef and an early champion of sustainable fishing practices. In 2005 he opened RM Seafood and r bar cafe at Mandalay Bay in Las Vegas. He is a founding member of the Seafood Choices Alliances and is on the board of advisors for the French Culinary Institute. In 2010 he was a finalist on the second season of Bravo's "Top Chef Masters."
Loading...
or
Not Currently Available for Direct Purchase