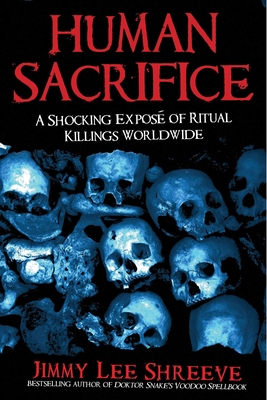 Welcome to the terrifying world of ritual sacrifice.

Around the world, humans are being trafficked, kidnapped, sold, and enslaved for the specific purpose of sacrifice. Mass-scale migration has seen these gruesome techniques exported from the land of the Aztecs and finding their way to the United States, Britain, and many other locations worldwide. Voodoo priests in London have been linked to ritual murders, and not long ago a Palo Mayombe priestess’s New York City apartment yielded its grisly secrets. One New Jersey investigator says that sacrificial rites are not only going on today, but can be traced back ninety years in the States alone.

Jimmy Lee Shreeve takes us on a nightmare journey, following the initial investigations of Scotland Yard into the murder of a five-year-old boy whose torso was found floating in the Thames in 2001, and traveling to Africa to unveil a grim trade of exporting humans for sacrifice. He uncovers the dark side of voodoo and muti magic, linked with a score of sacrifices and murders, and in Mexico, finds a devotee of Palo Mayombe responsible for torturing his victims and boiling them in a cauldron. Along the way, Shreeve brings his own brand of offbeat detective skills to the fore, providing startling conclusions to some of the world’s most horrific murders. Brutal and disturbing, Human Sacrifice takes us into the dark world of twenty-first-century ritual murder.