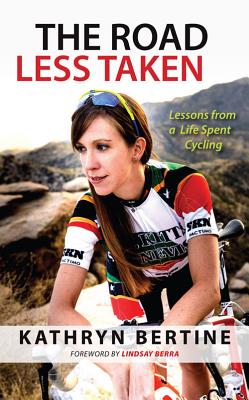 Lessons from a Life Spent Cycling

In The Road Less Taken, Kathryn Bertine takes readers through her journey of striving to become a professional cyclist in her mid-30s. Her essays explore the twists and turns on life’s unexpected roads via bicycle, but also the larger meaning of what it means to heed one’s inner compass and search for a personal true north. With her signature wit and humor Bertine’s essays travel far beyond the bike lane, resonating with anyone who has ever dared to try and turn their dreams into a reality.

Kathryn Bertine is a writer, athlete, activist and documentary filmmaker. She is the 2013 Caribbean Champion, three-time national champion of St. Kitts and Nevis (SKN) and professional cyclist with Wiggle-Honda. A native of Bronxville, NY she lives and trains in Tucson, AZ. She holds a BA from Colgate University and an MFA from the University of Arizona. Athletics have been a constant in Bertine’s life since childhood. She is a former Division I rower for Colgate University, a pro figure skater, and pro triathlete–which eventually lead to the beginning of her road cycling career in 2007. Off the bike, she is a journalist and author of two sports memoirs (All The Sundays Yet to Come and As Good As Gold), and wrote the "So You Wanna Be an Olympian?" column for ESPN and the "Riding with the Pros" column for espnW, where she also worked as senior editor in 2011. As an advocate for equality in women’s sports, Bertine started the movement of Le Tour Entier with fellow athletes Emma Pooley, Marianne Vos & Chrissie Wellington in an effort to bring parity to women’s professional road cycling, starting with the Tour de France. Her film, HALF THE ROAD: The passion, pitfalls and power of women’s professional cycling is her first documentary. You can follow her on Twitter at @kathrynbertine and @halftheroad and @letourentier
Loading...
or
Not Currently Available for Direct Purchase