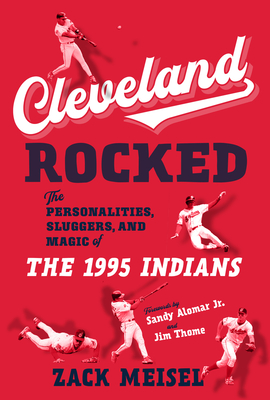 The Personalities, Sluggers, and Magic of the 1995 Indians

In 1995, Cleveland rocked. With Montell Jordan's "This Is How We Do It," blaring in the locker room, the Indians racked up 100 wins in a strike-shortened season and reached the World Series for the first time in 41 years. Fans were on a first-name basis with the stars that lit up the city: Omar, Manny, The Thomeinator, A.B.

Cleveland Rocked is the complete story of the team that brought sellout crowds and walk-off wins to the corner of Carnegie and Ontario. Author Zack Meisel traces the roots of the pennant winner, from trading All-Star Joe Carter for Sandy Alomar and Carlos Baerga in 1989 to the campaign to build a new stadium. Meisel introduces readers to a cast of characters that larger-than-life personalities, including Belle, Thome, Kenny Lofton, Eddie Murray, and manager Mike Hargrove, who managed to keep the clubhouse at peace. Thrilling come-from-behind wins jump off the page as the Indians race toward clinching the division. Then Meisel details the Indians' October to Remember, from thrilling playoff triumphs over Boston and Seattle to the first World Series games in Cleveland since the days of Bob Feller. Cleveland Rocked offers the story of a team that brought baseball back in Northeast Ohio.

Zack Meisel covers the Indians for The Athletic and previously covered the team for cleveland.com and MLB. He is a 2011 graduate of Ohio State University. He lives in Cleveland. Sandy Alomar Jr. played 20 seasons in Major League Baseball, including 11 with the Cleveland Indians, with whom he won Rookie of the Year and a Gold Glove Award. He now serves as the Indians first base coach. Jim Thome played 22 seasons in MLB, including 12 with the Cleveland Indians. A five-time All-Star, Thome was inducted into the Baseball Hall of Fame in 2018.
Loading...
or
Not Currently Available for Direct Purchase