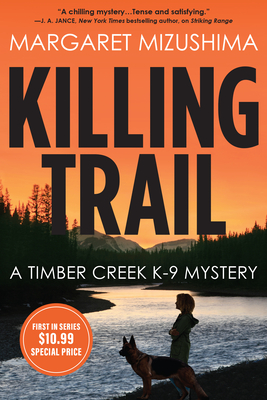 When a young girl is found dead in the mountains outside Timber Creek, life-long resident Officer Mattie Cobb and her partner, K-9 police dog Robo, are assigned to the case that has rocked the small Colorado town.

With the help of Cole Walker, local veterinarian and a single father, Mattie and Robo must track down the truth before it claims another victim. But the more Mattie investigates, the more she realizes how many secrets her hometown holds. And the key may be Cole's daughter, who knows more than she's saying.

The murder was just the beginning, and if Mattie isn't careful, she and Robo could be next.

"The interactions between Mattie and Robo will tug the heartstrings of every dog lover...Mizushima’s debut reflects both her skill as a suspense writer and her respect for animals. The shocking conclusion will stay with readers while they wait for the next story in the series. Pair this with Robert Crais’ Suspect (2013)"
—Booklist starred review

"Winning heroine...strong debut...a realistic view of how a K-9 team works, treating Robo as an important character, but never stooping to anthropomorphism. And it’s impossible not to fall in love with Robo."
—Publishers Weekly starred review

"Mizushima does an excellent job of developing [Mattie and Robo] as characters, allowing readers to feel a personal connection to them both. Overall a great debut for an up-and-coming mystery writer."
—RT Book Reviews, Top Pick

"Readers who love animals and the outdoors will particularly enjoy what is a good read."
—Mystery Scene

"A deftly crafted mystery that is all the more impressive considering that Killing Trail is author Margaret Mizushima’s debut...Solidly entertaining from beginning to end."
—Midwest Book Review

"Fascinating detail about the psyche and handling of K-9 police dogs...and the loving interaction between Robo and Mattie...are more than enough to carry the book and entice me to read more in the series."
—Deadly Pleasures

"Mizushima’s characters are extremely compelling, and she ably draws the reader into the life of each one. Readers will quickly become invested...and many will be eagerly reading each and every installment."
—The Washington Park Profile

"Margaret Mizushima’s Killing Trail introduces a fine new crime-fighting team, Mattie Lu Cobb and her partner, Robo, who happens to be a dog. They’re put to the test in Timber Creek, a small town in Colorado, and the result is a satisfying mystery with a couple of cops you’re going to be glad to meet. Check it out."
—Bill Crider, Anthony Award Winner and author of Between the Living and the Dead

“Compelling characters, both human and canine, make Killing Trail a standout first novel. Officer Mattie Cobb battles external danger and her own troubled past as she and her K-9 partner race to catch a killer. Mattie is both caring and relentless, and everyone should have a partner like Robo.”
—Bonnie Hearn Hill, author of If Anything Should Happen and Goodbye Forever

“No scent is too fine and no clue too subtle for the sharp cop combo of Mattie Cobb and the unforgettable K-9 Robo. The liars and schemers of Timber Creek don’t stand a chance against this tight, determined duo. With plenty of outdoor action, comparing Margaret Mizushima to Nevada Barr and C.J. Box is apt—and on the nose.”
—Mark Stevens, author of the award-winning Trapline and Lake of Fire

“A terrific debut with a refreshing detective duo—Deputy Mattie Lu Cobb and Robo, her K-9 partner! Margaret Mizushima has crafted a compelling and savvy mystery that explores the big secrets in a small western town. I was cheering on Mattie and Robo every step of the way.”
—Margaret Coel, author of The Man Who Fell from the Sky

Margaret Mizushima balances writing with assisting her husband with their veterinary clinic and Angus cattle herd. Her short story “Hayhook” was published in the Rocky Mountain Fiction Writers 2014 anthology, Crossing Colfax. She lives with her husband on a small ranch in Colorado where they raised two daughters and a multitude of animals.
or support indie stores by buying on