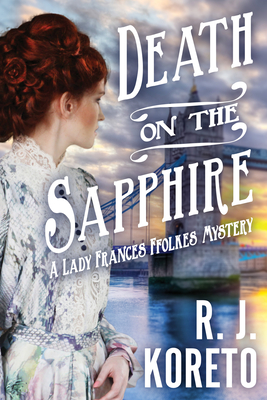 Death on the Sapphire (A Lady Frances Ffolkes Mystery #1)

An extraordinary woman living in extraordinary times, Lady Frances Ffolkes is an Edwardian-era suffragette who has an uncanny ability to attract danger and romance.

When Major Colcombe, a family friend and war veteran, dies under mysterious circumstances, the good Lady Frances discovers that he was working on a manuscript about South Africa's bloody Boer War, which reportedly revealed a scandalous mistake that cost many innocent lives. Now, it's up to Frances and her loyal lady's maid, June Mallow, to track down the missing manuscript and bring the killer to justice. Despite clashes with Scotland Yard and the British Secret Service, Frances never backs down and finds herself in several very unfortunate positions—and one very fortunate love triangle.

Death on the Sapphire, R. J. Koreto's witty and winsome series debut, is sure to delight fans of historical mysteries for years to come.

"[A] refreshing debut... Readers will look forward to seeing more of Frances in the promised sequel."
—Publishers Weekly

“An intelligent and engrossing historical novel with an wonderfully independent heroine (of the right social class!) and her enterprising maid. But it is by no means a cozy story, delving into the grim realities of war.”
—Rhys Bowen, New York Times bestselling author of the Molly Murphy and Royal Spyness mysteries

“R. J. Koreto introduces a delightful new heroine with Lady Frances Ffolkes. Everyone underestimates Lady Frances and usually to their dismay. You’ll love reading about her adventures as she takes time out from her efforts in the Women’s Suffrage movement to solve the murder of an old friend.”
—Victoria Thompson, bestselling author of Murder in Morningside Heights

“What a fun read, good storytelling that whisks along at a cracking pace, neatly plotted with a satisfying ending. Lady Frances Ffolkes is irresistible—caring, clever and resourceful. I look forward to meeting her again many times.”
—M. R. C. Kasasian, author of the Gower Street Detective series

“A memorable heroine—a young suffragette—and her equally dauntless maid engage in a battle of wits against the Establishment that is ready to kill to keep the truth buried. An enjoyable read.”
—Carola Dunn, author of the Daisy Dalrymple mysteries

“Spirited and tenacious, Lady Frances Ffolkes is a force to be reckoned with as she endeavors, undaunted by all obstacles, to find a missing manuscript and solve the murder of a family friend in this charming Edwardian-era mystery. With Death on the Sapphire, R.J. Koreto has given us a winning heroine and a thoroughly delightful read.”
—Ashley Weaver, author of the Amory Ames mysteries

Like his heroine, Frances Ffolkes, R. J. Koreto is a graduate of Vassar College. He has spent most of his career as a financial journalist. He is a member of Mystery Writers of America, and his work has appeared in Ellery Queen’s Mystery Magazine. He lives in New York, NY. This is his first novel.
Loading...
or
Not Currently Available for Direct Purchase