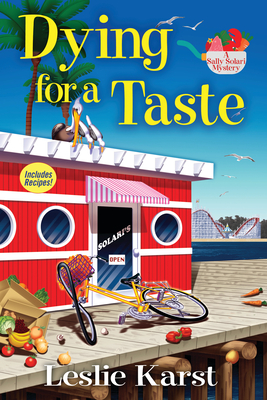 Dying for a Taste

After losing her mother to cancer, Sally Solari quits her job as an attorney to help her dad run his old-style Italian eatery in Santa Cruz, California. But managing the front of the house is far from her dream job.

Then in a sudden twist, her Aunt Letta is found murdered in her own restaurant, and Sally is the only one who can keep the place running. But when her sous chef is accused of the crime and she finds herself suddenly short-staffed, Sally must delve into the world of sustainable farming—not to mention a few family secrets—to help him clear his name and catch the true culprit before her timer runs out.

Leslie Karst serves a platter of intrigue in her stirring and satisfying debut Dying for a Taste, which is sure to become a new favorite of food mystery fans.

Praise For Dying for a Taste: A Sally Solari Mystery…

“The story blends the best of the cozy genre with food and great characters... This is the perfect book to chew on while eating lunch in the break room or before cooking that perfect dinner.”
—Jeff Ayers, RT Book Reviews, four-star review

"Dying for a Taste is as delicious as a four-course meal...an enjoyable culinary mystery that will no doubt leave readers hungry for more."
—Manhattan Book Review

"Dying for a Taste is a successful blend of mystery and foodie novels... This amuse-bouche will leave readers salivating for the next Sally Solari mystery."
—Foreword Reviews

"The best mysteries, to my mind, have a deep and sympathetic understanding of human nature as well as a rock solid ethical foundation, and Leslie Karst's Dying for a Taste satisfies on both counts. With a smart sleuth, captivating seaside setting and strong family relationships, this delicious culinary mystery left me hungry for second helpings."
—Leslie Meier, author of the Lucy Stone mystery series

“Holy cannoli! You must not miss Leslie Karst's snappy debut, Dying for a Taste. Karst serves up a funny, feisty heroine, Italian family drama, a charming coastal California town, and clues tangled up like a plate of spaghetti carbonara. But don't read hungry—the food will leave you drooling!”
—Lucy Burdette, author of Killer Takeout and Fatal Reservations

"You won't want to push away this delicious plate of mystery from debut author Leslie Karst. And you'll be DYING FOR A TASTE of sleuth Sally Solari's family's cooking, both Italian and Polynesian. Don't read while hungry!"
—Edith Maxwell, Agatha-nominated and bestselling author of Murder Most Fowl in the Local Foods mysteries

"Dying for a Taste is a bright, fresh take on the traditional mystery, richly steeped in the local food and restaurant culture of northern California. Karst combines a twisty mystery with an original set of lively characters and a deep sense of place."
—Bailey Cates, NYT bestselling author of the Magical Bakery mysteries

“Leslie's Karst's DYING FOR A TASTE is a mouthwatering meal of intricate plotting and complex characterization in a sparkling setting on the coast of California. The plot moves swiftly through twists and turns led by former legal eagle, Sally Solari, a smart, savvy heroine who will not quit until she gets the answers she seeks in the mystery of who murdered her restauranteur aunt. At turns poignant and precarious, this story captivates all the way to the very last page. A terrific whodunit!”
-Jenn McKinlay, New York Times bestselling author of the Cupcake Bakery mysteries

“Leslie Karst’s debut mystery, Dying for a Taste, is a delightful romp of a book. Sympathetic characters, family dynamics, fast paced action, and vivid food descriptions combine to make this an entertaining read. It made me want to head straight to the kitchen and cook up a batch of pasta.”
—Isis Crawford, author of the Catered mysteries

“Stir in a pinch of poison, a dash of family, a big helping of the restaurant life, and a big scoop of murder, and Dying For a Taste has all the stuff of a delicious new cozy mystery series.”
—Paige Shelton, New York Times bestselling author of the Country Cooking School mysteries and Farmers' Market mysteries

“Dying for a Taste is an addictive start to a promising new mystery series. Leslie Karst has dished up a delicious blend of humor and intrigue, with a warm and friendly cast of characters that will leave readers feeling right at home. Karst’s writing is bright and refreshing, spiced just right and tasty enough to leave the reader hungry for more.”
—Jacklyn Brady, national bestselling author of the Piece of Cake mysteries

Leslie Karst has degrees in English literature, law, and culinary arts. After graduating from Stanford Law School, she worked for twenty years as a research and appellate attorney before retiring. Karst now spends her time cooking, gardening, cycling, singing alto in the local community chorus, and of course writing. She and her wife, Robin, and their Jack Russell mix, Ziggy, split their time between Santa Cruz, California and Hilo, Hawaii.
Loading...
or
Not Currently Available for Direct Purchase