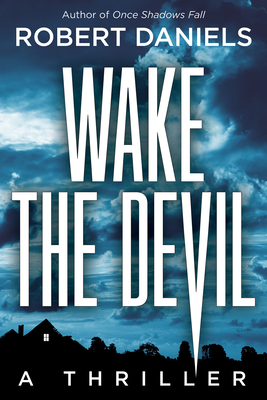 Seven months after their last encounter, retired FBI agent Jack Kale and Atlanta Police Detective Beth Sturgis are reunited by a new case that pits them against the Sandman, a nearly perfect assassin who leaves no clues, can change his appearance seemingly at will, and has eluded police on four continents for years.

Now, it's a race against time to protect the Sandman's next targets—two witnesses scheduled to testify before a grand jury by the end of the week. With the clock ticking down, Kale and Sturgis dive headfirst into a desperate chase to catch the killer before he strikes and disappears again.

Just as he thought he was finally safe, Kale must one again battle the demons lurking in the corners of his mind to take on an all-too-real new nightmare in Wake the Devil, the second in Robert Daniels's thrilling series.

Praise For Wake the Devil: A Jack Kale and Beth Sturgis Mystery…

Praise for Wake the Devil:
"Don’t plan on sleeping until you read the last word...impossible to put down."
—RT Book Reviews, Top Pick, 4.5 Stars

"Impressive...a fine, twisty plot and some really jarring surprises at the end."
—Booklist

Praise for the series:
"Daniels’ superbly entertaining procedural...lifts itself into a special place among psychological thrillers because of its evocative writing."
—Booklist starred review

"The story’s execution is smooth...Daniels provides a killer with a believable back story and motive, bringing the mystery to a satisfying conclusion."
—Kirkus Reviews

"Once Shadows Fall is a complex and well-written thriller with plenty of suspense and lots of action. An impressive debut."
—Thomas Perry, New York Times bestselling author of Forty Thieves

“Robert Daniels is the new Thomas Harris. With a villain that is as sinister, creepy, and fascinating as he is compelling. A wonderful new talent has arrived, fully formed. This is the future of the thriller.”
—Ken Bruen, awarding winning author of Green Hell

Robert Daniels, author of Once Shadows Fall is a clinical psychologist. He currently lives in Atlanta, GA, where he was born and raised.
Loading...
or
Not Currently Available for Direct Purchase