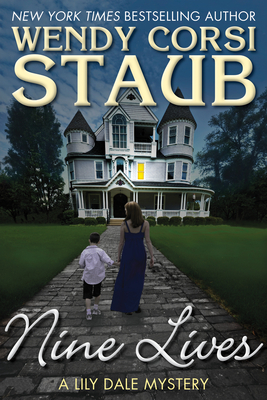 In this warm and witty series debut from New York Times bestseller Wendy Corsi Staub, a widowed young mom plans a fresh start in Chicago—but instead finds her way to a quirky lakeside village that just happens to be populated by mediums.

When reluctant road trippers Bella Jordan and her son Max detour to Lily Dale, New York, they're planning to deliver a lost cat to its home and then move on, searching for one of their own. But the footloose feline's owner Leona Gatto has unexpectedly passed away, leaving behind a pregnant pet without a mistress, a busy inn without a keeper—and a lovable circle of neighbors who chat with dead people.

After agreeing to help out temporarily, sensible Bella doesn't need psychic gifts to figure out that a houseful of tourists and a litter of kittens lie in her immediate future—or that Leona was murdered. It's up to her to solve the case so that she and Max can leave town, but their new home—like Leona's killer—might just lurk where she least expects it.

"[A] charming series launch"[Staub] introduces a host of warmly appealing characters and throws in a touch of the otherworldly. Recommend for readers who enjoy the TV show Charmed.”
—Library Journal

"Best-selling author Staub takes readers...on a spooky journey into the unknown while lightening the mood by weaving in sweet, heartfelt, hopeful moments."
—Booklist

“No spirits were bruised in the writing of this tale.”
—Kirkus Reviews

"A good cozy by a good writer telling of a town that is its own character, just as much as the people that reside there"
—Suspense Magazine

"Nine Lives achieves just the right balance of charming and quirky, with Staub offering up a loveable cast of characters who will hopefully be haunting readers for years to come."
—Hartford Books Examiner

"Wendy Corsi Staub’s Nine Lives hooked me from page one. In fact I didn’t want to put it down: with warm characters, an intriguing setting and just a touch of the unexplainable it’s a thoroughly satisfying read.
—Rhys Bowen, New York Times bestselling author of the Molly Murphy and Royal Spyness mysteries

“I loved visiting Corsi Staub’s magical world, cover to cover, and can’t wait for the next in the series.”
—Juliet Blackwell, New York Times bestselling author of Give Up the Ghost

"An entertaining tale...Succeeds as an engrossing, suspenseful thriller."
—Booklist

"When it comes to mysteries of the home and hearth, Wendy Corsi Staub is unrivaled. Just when you think you’ve figured her out...think again!"
—John Valeri, Hartford Books Examiner

New York Times and USA Today bestseller Wendy Corsi Staub is the award-winning author of more than eighty novels and has twice been nominated for the Mary Higgins Clark Award. She lives in the New York City suburbs with her husband, their two sons, and a rescued stray cat named Chance.
Loading...
or
Not Currently Available for Direct Purchase