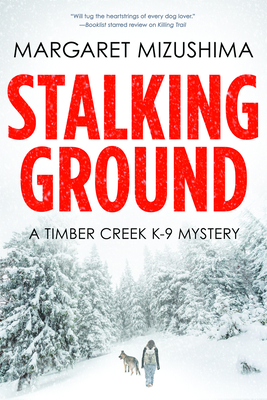 When Deputy Ken Brody's sweetheart goes missing in the mountains outside Timber Creek, Mattie Cobb and Robo are called to search. But it's mid-October and a dark snow storm is brewing over the high country—and they're already too late. By the time they find her body, the storm has broken and the snow is coming down hard.

While Brody hikes down to bring back the forensics team and veterinarian Cole Walker gathers supplies to protect them from the storm, Mattie and Robo find themselves alone, guarding the gravesite overnight in the dead of the early winter. And that's only the first long, dark night in a series of them, because as their investigation develops, Mattie, Robo, Brody, and Cole find themselves in the middle of the killer's stalking ground—with no way out unless they can catch a predator more deadly than any natural threat.

Filled with tension, excitement, and heart, this new installment in Mizushima's much lauded series will send a chill down every reader's spine.

"Mizushima’s sophomore outing proves that her acclaimed series debut, Killing Trail, was no fluke...dog loves will want to read this thriller."
—Library Journal

"The story is one that will keep you reading...[I] would recommend it as a very good mystery."
—Night Owl Reviews, 4 1/2 star review, Top Pick

"The family complications of Adrienne Howard, Mattie, and Cole are as different as they could be, yet the novel succeeds in threading together the relationships into one cohesive theme...Mattie and Robo’s teamwork ensure a satisfying read, while Robo’s intimidating work ethic delivers a suspenseful and thrilling conclusion."
—King’s River Life

"The interactions between Mattie and Robo will tug the heartstrings of every dog lover...Mizushima’s debut reflects both her skill as a suspense writer and her respect for animals. The shocking conclusion will stay with readers while they wait for the next story in the series. Pair this with Robert Crais’ Suspect (2013)"
—Booklist starred review

"Winning heroine...strong debut...a realistic view of how a K-9 team works, treating Robo as an important character, but never stooping to anthropomorphism. And it’s impossible not to fall in love with Robo."
—Publishers Weekly starred review

"Mizushima does an excellent job of developing [Mattie and Robo] as characters, allowing readers to feel a personal connection to them both. Overall a great debut for an up-and-coming mystery writer."
—RT Book Reviews, Top Pick

“A terrific debut with a refreshing detective duo—Deputy Mattie Lu Cobb and Robo, her K-9 partner! Margaret Mizushima has crafted a compelling and savvy mystery that explores the big secrets in a small western town. I was cheering on Mattie and Robo every step of the way.”
—Margaret Coel, author of The Man Who Fell from the Sky

MARGARET MIZUSHIMA, author of the award winning and internationally published Timber Creek K-9 Mystery Series, balances writing with assisting her husband with their veterinary clinic and Angus cattle herd. Active within the writing community, Margaret serves as president for the Rocky Mountain Chapter of Mystery Writers of America, was elected the 2019-2020 Writer of the Year by Rocky Mountain Fiction Writers, and is also a member of Northern Colorado Writers and Sisters in Crime. She lives in Colorado on a small ranch with her veterinarian husband where they raised two daughters and a multitude of animals.
Loading...
or support indie stores by buying on
(This book is on backorder)