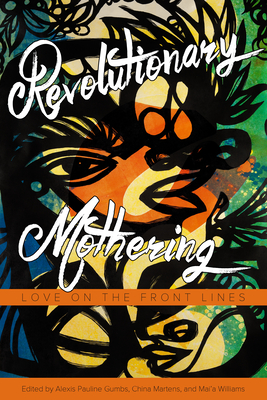 Love on the Front Lines


Praise For Revolutionary Mothering: Love on the Front Lines…

"This book is a necessary reminder that beyond the headlines, position papers, and generalizations made about mothers are voices from the front lines that we all need to hear." —Dani McClain, The Nation

"In times like these, Revolutionary Mothering: Love on the Front Lines teaches me that hope, love and change are always possible." —Cantrice Janelle Penn, blackgirldangerous.org

"Revolutionary Mothering is a dreambook. Place it on your bedstand and when you awaken, scribble your not-quite-daylight visions in the margins so your dreams will be in good company. With its protean take on mothering, expect to pick up a new book each time you open it." —Almah LaVon, novelniche.net

"Revolutionary Mothering translates fervor into art and, ultimately, as its epigraph suggests, reminds us that 'mothering is love by any means necessary.'" —Danielle Price, Herizons

"Revolutionary Mothering: Love on the Front Lines is a powerful and deeply personal collection that illuminates the challenges and revolutionary practice that is mothering in the context of capitalism, white supremacy, hetero-patriarchy, and imperialism." —Reena Shadaan, Journal of the Motherhood Initiative

Alexis Pauline Gumbs was named one of UTNE Reader’s 50 Visionaries Transforming the World in 2009, a Reproductive Reality Check Shero, a Black Woman Rising nominee in 2010, and was awarded one of the first-ever Too Sexy for 501c3 trophies in 2011. She is a cocreator of the MobileHomecoming experiential archive and documentary project, which has been featured in Curve Magazine, the Huffington Post, in Durham Magazine, and on NPR. She lives in Durham, North Carolina. China Martens is the author of The Future Generation: The Zine-book for Subculture Parents, Kids, Friends and Others, and coeditor of Don’t Leave Your Friends Behind: Concrete Ways to Support Families in Social Justice Movements and Communities. She was a cofounder of Kidz City, a radical child care collective in Baltimore (2009–2013). She lives in Baltimore, Maryland. Mai’a Williams is the creator and director of Water Studio which supports and cocreates with underground community artists and revolutionaries in Cairo, Egypt. Her essays, short stories, and poetry have appeared in publications such as make/shift, Mamaphiles, Popshot, and Woman’s Work. She is the instigator of the Outlaw Midwives movement, zines, and blog, and is the author of the anthology Revolutionary Motherhood, which became the inspiration for Revolutionary Mothering.
Loading...
or support indie stores by buying on