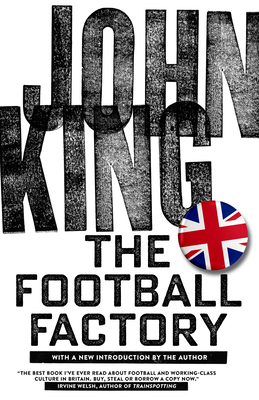 “Only a phenomenally talented and empathetic writer working from within his own culture can achieve the power and authenticity this book pulses with. Buy, steal, or borrow a copy now, because in a short time anyone who hasn't read it won't be worth talking to.”  —Irvine Welsh, author, Trainspotting

The Football Factory is driven by its two main characters—late-20s warehouseman Tommy Johnson and retired ex-soldier Bill Farrell. Tommy is angry at his situation in life and those running the country. Outside of work, he is a lively, outspoken character, living for his time with a gang of football hooligans, the excitement of their fights and the comradeship he finds with his friends. He is a violent man, at the same time moral and intelligent. Bill, meanwhile, is a former World War II hero who helped liberate a concentration camp and married a survivor. He is a strong, principled character who sees the self-serving political and media classes for what they are. Tommy and Bill have shared feelings, but express their views in different ways. Born at another time, they could have been the other. As the book unfolds both come to their own crossroads and have important decisions to make. The Football Factory is a book about modern-day pariahs, people reduced to the level of statistics by years of hypocritical, self-serving party politics. It is about those who are insulted, marginalized, and unseen. Graphic and disturbing, and at times very funny, The Football Factory is a rush of literary adrenalin. This edition includes a new introduction by the author.


Praise For The Football Factory…

“King’s novel is not only an outstanding read, but also an important social document. . . . This book should be compulsory reading for all those who believe in the existence, or even the attainability, of a classless society.”  —Paul Howard, Sunday Tribune

“Bleak, thought-provoking and brutal, The Football Factory has all the hallmarks of a cult novel.”  —Dominic Bradbury, Literary Review

“Powerfully written and tells you more about the mentality of those who disrupt football matches than all the theses of the sociologist academics put together.”  —Ian Wooldridge, Daily Mail

John King is the author of seven novels, including England Away, Headhunters, The Prison House, Skinheads, and White Trash. He currently publishes and edits Verbal, a fiction-based publication.
or
Not Currently Available for Direct Purchase