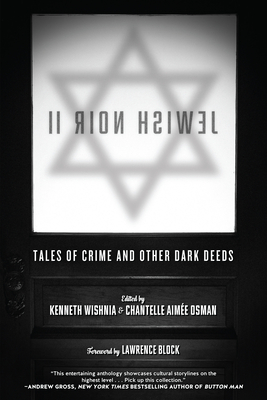 Tales of Crime and Other Dark Deeds

Jewish Noir 2 is unique collection of twenty-three all-new stories (and one reprint) by Jewish and non-Jewish literary and genre writers, including numerous award-winning authors such as Gabriela Alemán, Doug Allyn, Rita Lakin, Rabbi Ilene Schneider, E.J. Wagner, and Kenneth Wishnia, with a foreword by MWA Grand Master Lawrence Block. The stories explore such issues as the perpetual challenge of confronting resurgent anti-Semitism in the US, the enduring legacy of regional warfare in the land of Israel since biblical times, how the “entitled” behavior of certain ultra-Orthodox communities can fuel anti-Semitic attitudes, Jewish support of the civil rights movement, greedy Jewish businessmen who reinforce negative ethnic stereotypes, the excesses of “golden ghetto” American Jews, the appeal of “tough” Israeli-Jewish soldiers and mercenaries, how real estate fortunes are made, and the consequences of political corruption that feed into an exploitive system, how obsession can lead “good” people to do “bad” things.

Lawrence Block has been writing crime, mystery and suspense fiction for more than half a century. He has published in excess of 100 books and no end of short stories. He apprenticed under various pseudonyms in the late 1950s; the first time his name appeared in print was for his short story, “You Can’t Lose,” in Manhunt (Feb. 1958), and the first book published under his own name was Mona (1961), reprinted by Hard Case Crime under the author’s original title, Grifter’s Game (2005). Block is best known for his series characters, including cop-turned-PI Matthew Scudder, gentleman burglar Bernie Rhodenbarr, globe-trotting insomniac Evan Tanner, and introspective assassin Keller. Block is a Grand Master of Mystery Writers of America, and a past president of MWA and the Private Eye Writers of America. He has won the Edgar and Shamus awards four times each, and the Japanese Maltese Falcon award twice, as well as the Nero Wolfe and Philip Marlowe awards, a Lifetime Achievement Award from the Private Eye Writers of America, and the Diamond Dagger for Life Achievement from the Crime Writers Association (UK). He’s also been honored with the Gumshoe Lifetime Achievement Award from Mystery Ink magazine and the Edward D. Hoch Memorial Golden Derringer for Lifetime Achievement in the short story. In France, he has been proclaimed a Grand Maître du Roman Noir and has twice been awarded the Société 813 trophy. He has been a guest of honor at Bouchercon and at book fairs and mystery festivals in France, Germany, Australia, Italy, New Zealand, Spain and Taiwan. As if that were not enough, he was also presented with the key to the city of Muncie, Indiana. (But as soon as he left, they changed the locks.) lawrenceblock.com.

Chantelle Aimée Osman is the editor of Agora, an imprint of Polis Books. Agora focuses on crime novels that delve into the most important issues of our time—exploring society, economy, politics, culture, race, and gender in unique and different ways—from a roster of diverse authors from varying backgrounds. The former Editor-in-Chief of RT Book Reviews Magazine and a freelance editor for over 10 years, she also is an instructor at the Virginia G. Piper Center for Creative Writing, Authors at Large and LitReactor. Chantelle is the author of the non-fiction series on writing The Quick and Dirty Guides To… and has also published numerous works of short fiction in addition to serving as editor for several anthologies. Find her online at chantelleaimee.com and on Twitter @SuspenseSiren.

Kenneth Wishnia’s novels include 23 Shades of Black, an Edgar Allan Poe Award and Anthony Award finalist; Soft Money, a Library Journal Best Mystery of the Year; Red House, a Washington Post “Rave” Book of the Year; and The Fifth Servant, an Indie Notable selection, a Jewish Press Best Mystery of the Year, winner of a Premio Letterario ADEI-WIZO, and a finalist for the Sue Feder Memorial Historical Mystery Award. His short stories have appeared in publications such as Ellery Queen, Alfred Hitchcock, Queens Noir, Long Island Noir, Send My Love and a Molotov Cocktail!, and Denim, Diamonds and Death. He edited the Anthony Award–nominated anthology Jewish Noir for PM Press. He teaches writing, literature, and other deviant forms of thought at Suffolk Community College on Long Island. www.kennethwishnia.com.